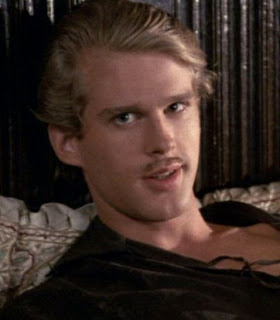 "Life is pain, highness.  Anyone who says differently is selling something."

As was mentioned in my previous post, if you're planning to be a published author, you'd better brace yourself for a lot of rejection.  Whether you're rejected initially by a publisher separate from yourself, or whether you're rejected by a reviewer after your publication, the reality is that you're putting your work out there for others to critique...and not everyone agrees with you.

Now, the hope is that somewhere, somebody - hopefully many somebodies - will like your work.  As Terry Pratchett put it in his Maskerade, (a brilliant send-up of The Phantom of the Opera), every publisher dreams of making so much money that he has to hire two extra men to hold his trousers up - and I wager that secretly every author has a similar, J.K. Rowling-esque dream.

But it's worth noting that even Mrs. Harry Potter herself was passed over by seven publishers at first.  In fact, I remember several years ago speaking with a publisher who had been one of those who'd given the Boy Who Lived a pass - not because the book wasn't good, but because it didn't fit within their imprint.  This editor explained that she knew the book was something special...and also knew there was an editor out there for this Wizard, she just wasn't the Muggle for the job.

Those who are pioneering indie publishing might now wave a flag above their camp.  But even here we can look at Ms. Rowling's published work...and the fervent debates and detractors (myself, I must admit, at first cautiously among them) which her Harry Potter novels have garnered.

Simply put, an artist's life is not one of whimsy so much as it is of endurance.

So the question becomes...how does one endure?

Let's start first with rejection letters from publishers.  Say you've decided to submit something to a publisher: a short story, a poem, a script, a novel - whatever it may be.  Congratulate yourself!  Just making that decision is huge!  Now the next - and rather more important step - is to send it off.

This last point is one that I want to expand.  Sometimes, you can get so hyped-up in your brain about being rejected, that you concoct these wild ideas about how the person "judging" your work is going to let you down.  You start writing out terrible, horrible, nasty, pointed and personal rejections in your head.  (Hey, you are creative, after all!)  But let me debunk any of these nightmarish scenarios:

There are basically three types of rejection letters.

1) Form letters.  These are the most common.  At first, they'll seem the most hurtful, because even though you don't want to be rejected at all, you at least want to be rejected as a person and not as a number.  However, these are about as terrible as Shakespeare's "paper bullets of the brain."  Here's the truth.  Form letters are great.  They're the impassionate equivalent of putting a checkmark on your Excel spreadsheet that just says: "Not this market.  Try again."  Sometimes form letters will have little more than "Thank you for your submission.  Unfortunately we cannot use your piece at this time.  Please try again.  Sincerely, etc."  My story The Golden Men was recently rejected from Daily Science Fiction.  This was the rejection (fairly standard, with a little more explanation):


Thank you for submitting your story, "The Golden Men", to Daily Science Fiction. Unfortunately, we have decided not to publish it. To date, we have reviewed many strong stories that we did not take. Either the fit was wrong or we'd just taken tales with a similar theme or any of a half dozen other reasons.


See!  That wasn't so bad, was it?  They didn't yell at us and call us names or vilify our work with every synonym for "drivel" in the thesaurus, in fact they used the adjective "strong."  Although we have a tendency to zero in on the worst part of it, the truth is much more practical and revivifying.  So, nope.  Not this time.  Try again.  And don't give up on the one you sent.  (In point of fact, I think the piece I sent really wants to be a novel...so they're perfectly justified not purchasing it in its present state.)

2) Positive, personalized letters. These are when there's a little bit more specifically added to the basic form.  My favorite rejection of this sort is from about fifteen years ago when one of my short stories which was making the rounds of (then) print magazine submissions, was returned with a longish hand-written note that said that while they liked the story, it was really more sword and sorcery and therefore better suited to something like Marion Zimmer Bradley's Fantasy Magazine.  I laugh at this, because I'd sent the story first to MZB, who'd already rejected it - although they'd sent it back with editorial marks on it, which was very encouraging.  But this rejection letter encouraged me to keep trying MZB's market...and eventually I did write something worth putting into print.

That doesn't mean that every positive note doesn't still cause some pain.  Author beware: Do not open e-mail rejections while stuck in traffic in your car on the way home from work.  I did this recently on a day that I knew the final decision for the Thornton Wilder Playlet Competition was being sent out.  I must admit that I was very hopeful for this particular submission, a short verse play based on Childe Rowland, called To the Dark Tower Came.  I'd written it after much struggle with whether I'd even submit anything, and then trying to make a piece work that just wasn't working, and then giving up, and then deciding to start new, and then writing something overnight on the day that it was due, and then just sending it of at eight in the morning.  But I was pretty sure there was something there and every day I didn't hear anything, I grew more hopeful. 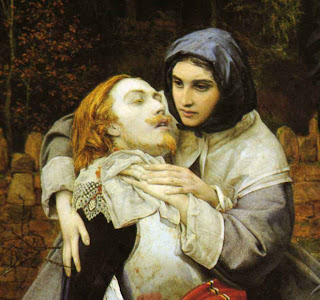 But then September 31st arrived, Route 9 in Framingham was backed up, I (foolishly) snuck out my phone and checked my mail, saw the notice, and started crying.  Oh, not hugely, but just enough to mourn the fact that my little play would have to wait for some other time to see the light of day.  In some ways, it was a relief - since upon rereading I wanted to add a scene and rework the meter of the Molieresque section -  but the simple fact is that when you're really invested in one of your works, even really, really encouraging rejections will give you a slight pain.  Here's what they wrote:

Thank you again for submitting to our Thornton Wilder Playwriting Contest. While "To The Dark Tower Came" was unfortunately not chosen as this year’s contest winner, we wanted to let you know that you were one of three playwrights who made it to the final round of evaluations. The judges admired the play’s ambition and thoughtful, provocative symbolism. As always, it was a pleasure to consider your work.

While we were only able to select one winner this year, the diverse array of exciting, inventive scripts we received from our brilliant playwrights has encouraged us to consider offering another such contest in the future. Thank you so much for participating in this one. I look forward to another opportunity to work together soon.

By the by, for all you aspiring playwrights out there, I highly suggest taking a look at Thornton Wilder's playlets for inspiration.  They're very different from Our Town or The Matchmaker!  If Playscripts.com does run a similar contest next year, you'll be in a good place already!

3) Mean, personal letters.  These are wicked rare.  In fact, I can only remember receiving one - also about fifteen years ago - and from a poetry magazine.  I'd sent in a handful of my stuff and they returned it to me with no form letter, no handwritten letter, just a post-it note - a teensy-TINSEY post-it note slapped onto the first of my poems.  Scribbled on it was the message:

Your poems are not of high enough quality for our magazine.

To which I replied aloud, "Your rejection letter is not of high enough quality for my file!"  Truly, I think it was one of my absolute favorite rejections ever.  And no, I don't even remember which magazine it was or what poems I sent.  So nyah.

We all want positive reviews.  But we can't control everyone's reaction to our work.  What we can get excited about is that:
There's that old adage that there's no such thing as bad publicity.  We can kind of put that same mentality towards reviews.  I touched upon this in another post about a critique I recently received of Charming the Moon.  It's tough to get anything less than a five-star review.  But what becomes important once you're dealing with critiques is to be able to:

1) Ascertain whether you can handle the truth.  If you find yourself very sensitive to every passing remark about your work...get someone else to sift through your reviews.  Or just thumb your nose to feedback altogether in a bid for sanity.  Write the next thing and write it well.  If you can read reviews...

2) Learn how to read between the lines.  Positive critiques are gold.  They encourage you on, reflect back to you what you did well, what appealed to your audience, and what you can capitalize on in the future.  With Nachtsturm, by and large, I've been fortunate to receive some pretty durn positive reviews.  For my Twelve Kingdoms Novels, I've received some glowing feedback and some not-so-glowing feedback.  But what I have to sift through is:

3) Remember that reviewers are people, too.  I am still ashamed of the reviews I gave to Paula Volsky's novels which she wrote subsequent to that masterpiece, Illusion. (If you like fantasy and Les Miserables and Tolstoy and a touch of steampunk...THIS IS YOUR BOOK.)  Because I felt self-important as a young reviewer, and since I was so young and wasn't old enough to appreciate her later novels, I wrote poor reviews of them.  That is, I wrote reviews which reflected the world as I saw it then, which is not the world as I see it now.  You don't know if your reviewer had a rotten day when they read your novel.

Let it slide off of you.

They bought your book.

You paid your bills.

Let all else rest.

Most of all, keep striving!  Learn from the feedback you receive.  Have a good cry, eat some chocolate, and begin again.  And don't let fear of some momentary pain stop you from even greater joys.  Because pretty soon you'll be racking in acceptances, and joining me at Outback for some celebratory margaritas, mate!

So what are you working on?  What are you sending out?  What's the worst critique you've ever gotten?  The best?  And how do you like your liquor?

Sound off in the comments below - and if you've read one of my humble offerings, I'd love to know what you think via Amazon, Goodreads or your own blog!  Just let me brace myself first.
Labels: arx publishing charming the moon girlebooks.com letters of love and deception nachtsturm castle niamh and the hermit playscripts inc. publishing 101 rejection the golden men to the dark tower came
Reactions:
Emily C. A. Snyder
Artistic Director and Co-Founder of TURN TO FLESH PRODUCTIONS. | Author of "Nachtstürm Castle," "Niamh and the Hermit." | Playwright: "Cupid and Psyche," "Math for Actors." | Classical director and educator.