Authors are often admonished, "Write what you know."  Which, most fantasy writers then point out, doesn't work so well for them!  Interestingly, the question authors get asked a lot is: "How much of what you wrote is true?"  Which again, leaves most fantasy authors banging their heads against their dragons.

That said, while I was talking Austen with Maria Grazia, it struck me that there's actually an awful lot in Nachtsturm Castle which I did draw from direct experience.  And that it came with embarrassing photos.  (Seriously.  Embarrassing.)  So, I humbly present to you: 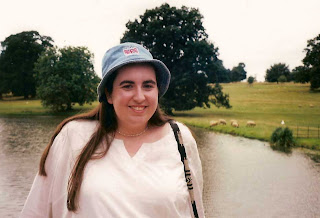 While it's true that Nachtsturm Castle doesn't begin in Bath, Northanger Abbey does.  (As does the forthcoming Presumption!)  I was fortunate enough to travel to Bath in August of 2000, one of the Jane Austen's Meccas, and got to visit: 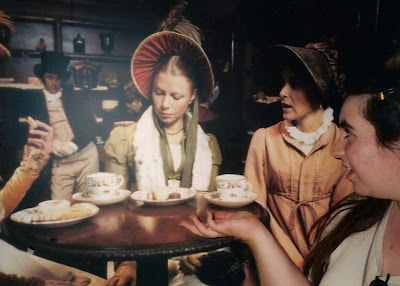 (Excuse the eyebrows and dopey grin.  Or paste your own face over mine!) 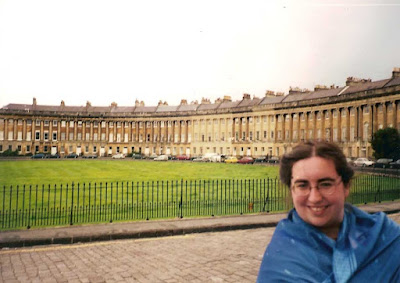 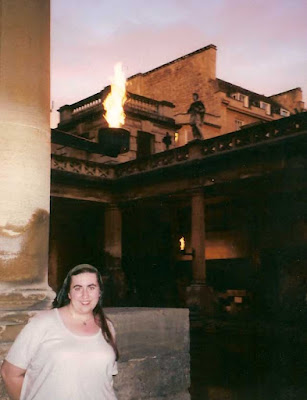 Which tells of Blunders and Birkenstocks

What interested me most about Bath was how much of a "postage stamp" it was - that is, it didn't feel like a sprawling city, it felt about the size of a postage stamp.  And just as pretty.  I hadn't realized how hilly it is, or how the river cuts through its heart, or how the Roman stamp has remained indelibly upon its very fabric through all these centuries.  It's a city very full of ghosts - some who wear togas, and some who drink tea.

My favorite story while there, and this fits into Nachtsturm Castle, as well as many of my other stories, is that how you are perceived and who you are may be two very separate things.  We were in Milsom Street and my two companions decided that they wanted to go into the shops a little more.  I wanted to stare at the architecture - which was also the only thing that fit into my budget at that point.  I was wearing my hair in this complicated double braid (my hair was down to my rear at that point), and a flowy blue skirt, flowy white blouse, and a sheer blue shawl that I'd bought in Stratford-upon-Avon.  I was also wearing "Jesus sandals" (aka knock-off Birkenstocks). 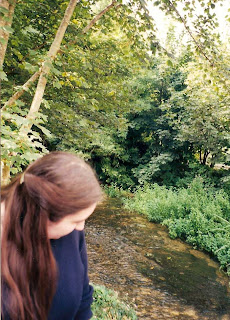 In my mind, I was attempting to be vaguely romantic looking in Jane Austen's city.  But to some fellow who was beating the drum for some sort of uber-eco-friendly charity, I looked like One Of Us.  He approached me - himself garbed in a loose shirt, cut-offs, and more battered Birkenstocks than my own - possibly some beads or other accoutrement were in attendance - and held out his clipboard confidently.  "Donate to the over-eco-friendly charity?" he said.

I, roused out of my reverie that was trying to picture the last scene of Persuasion and had been very happily contemplating Captain Wentworth, shook my head, looked at the eco-happy man and said, "Pardon?"

He looked at me with surprise.  "The eco-friendly charity?"  He repeated, like one half of a spy's password.

"Eco-friendly charity?  No, no thank you."

He furrowed his brow and looked down at my Birkenstocks.  He thought, "But...!" and then said, leaning in, "Are you sure?"

It was at this point that I looked at my own Birkenstocks.  He looked at my flowy shawl, as though it were a yellow carnation that We All Were Wearing.  "Yeah," I said after a moment.  "I'm not interested."

The eco-comrade nearly stumbled back.  "BUT - " he managed to say out loud this time, and looked really intently at me, as though he could tell that my braided-up hair had not been cut in three years.  Much like his own.

I finally realized what I looked like.  To my credit, I did not laugh.  "No.  No, thank you," I reiterated as my friends arrived and swooped me off.

And that, my friend, is a little bit about how Catherine came to have a doppelganger who is nothing like herself!
Labels: bath england doppelgangers jane austen maria grazia nachtsturm castle presumption very gothic travelogue
Reactions:
Emily C. A. Snyder
Artistic Director and Co-Founder of TURN TO FLESH PRODUCTIONS. | Author of "Nachtstürm Castle," "Niamh and the Hermit." | Playwright: "Cupid and Psyche," "Math for Actors." | Classical director and educator.