Which Deals with Gypsies and Genesius

I promised in Part I of a Very Gothic Travelogue that we would come to Paris (by way of Italy)...and, indeed, to Gypsies!  If you've read Nachtsturm Castle, you know that gypsies figure largely into the mythology, the Parisian adventure, and indeed the very means Henry employs to convince Catherine to travel abroad.  However what, if any, of those sections were drawn from life?  I'll tell you my stories, and you can scan the novel for correlations yourself! 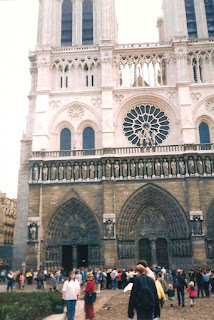 In the novel, Henry and Catherine travel to Paris where they visit, among other landmarks, Notre Dame de Paris.  I myself travelled there (more on the whole dangerous adventure later) and in the middle of perhaps one of the most harrowing adventures of my entire life, I was approached by a gypsy while attempting to take one of those awkward "Here I Am Standing In Front of the Thing to Prove that I Really Went There, Mom" photos (see right).

Now, European cities, at least in the fall of 1997, were full of gypsies.  This one (you can see her in red with the yellow kerchief) was a very bad gypsy.  That is to say, her plan seemed to be to bore me into giving her money.  The conversation went something like this (translated from the French):

Gypsy: Give me money. 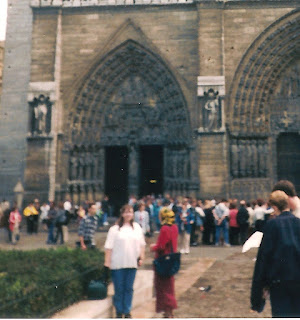 Gypsy: Give me money.

Man Behind the Camera: Another, sweetheart?

I was, at the time, far more concerned with the villainous man who was holding my camera.  (Again, more about him later.  He gets a whole post to himself.)

However, in Rome, I did encounter two gypsies who directly inspired the moment in the novel outside of Notre Dame. 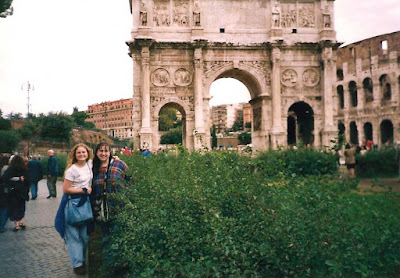 Neither my friend nor I know that five minutes after this photo, we would be accosted by gypsies!

There are many things I learnt from my (limited) dealings with gypsies in the Eternal City.

No sooner had we descended from the bus outside the above Triumphal Arch, but my roommate (not pictured) was set upon by gypsy children.  They thronged around her, opened up her purse casually, grabbed its contents, and then sauntered away.  The fanny pack is not your friend.  The money hidden in your bra is.

Gypsy Tip #2: Gotta catch 'em all!
About five minutes after that, we turned the corner only to be greeted by the sight of an American business man holding two gypsy children, each by the collar.  He was shaking them vigorously and shouting: "Where is my wallet?!?!?" over and over again, while the children laughed.  After a bit, the police wandered by and took the children into custody.

At first I was disposed to applaud the gentleman, but our RA - who was very cool and spoke German fluently and had a ponytail and a beard and dressed like he was in the Australian Outback - leaned over to me and murmured that the wallet had been passed off among the other gypsy children almost immediately, and that these two miscreants would be kept overnight, given good food and a dry place to sleep, and be released the next day.  Hence they were laughing.

Gypsy Tip #3: Acting, thank you!
For those of you who may not know who St. Genesius is, he's the patron saint of actors and all things theatrical.  So I imagine he would have been dreadfully amused by the little bit of street theatre I happened upon on our second or third day in Rome.

I had joined up with some fellow students who wanted to visit Scala Sancta, St. John Lateran's Basilica, and Santa Croce.  We managed Scala Sancta...which brought us smack dab up against siesta time.  If you haven't travelled abroad yet, what this means is that between the hours of 12-2 in most countries, and 12-3 in Italy, everything shuts down.  It's a wonderful idea, and great for the digestion because you have the time to really eat (not just scarf something down), and also time to rest (not rush back after your ten minute break), and also time to go to Mass or go to sleep or actually, y'know, converse with someone.
Only mad dogs and Englishmen stay out in the noon day sun....

Or, in my case, only gypsy families and American girls stay outside St. John Lateran's!

My friends went off to Santa Croce, determined to find the doors open.  I, tired of walking all morning, decided to stay and try my luck with St. John's.  However, as I turned from Scala Sancta to St. John's courtyard, I caught sight of a gypsy woman dragging her little boy along.  Given my encounters with gypsies thus far, I would have high-tailed it out of there, but since my money was 1) nearly gone, and what remained was 2) safely tucked inside my delicates, I watched the scene unfold instead

The woman was dressed as though the nearest Salvation Army was staffed by folks from Brigadoon: bangles, shawls, grungy long skirt, some sort of blouse.  The only things missing were bells on her ankles, a kerchief in her hair, and a crystal ball.  Her child, a tousel-headed boy who was very much made up of snips and snails and puppy dog tails, was screaming and digging his feet into the cobblestones.  She, conversely, was dragging him along by his arm and screaming right back at him.

I don't speak Italian, but I speak Mom.  You can guess what she probably meant.

Without meaning to, I snickered.

And suddenly, her eyes shifted to mine, and the raging harpy before me softened, began crooning, approaching me with her hand outstretched, as if she were reenacting Michaelangelo's Creation of Adam all on her onesies.  I believe her exact text went something like: 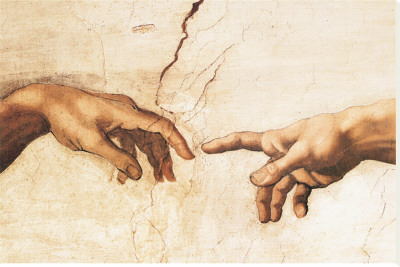 Gypsy: Bella, bella  senorita.  Prego, scusi, denari, moola, cashito, lire lire lire.  Cinquite lire.  Americano, lire.  Bambini, aie!  Bambini mange!  Bella senorita.  Pieta, senorita.  Lire, senorita.  Jesu, Maria!  Lotsa lire!  Stat!
For my part, I might have actually given them something, but I don't support bad art.  I went in search of gelato instead.  Which, because it was siesta, turned out to be the only store open!
And which I heartily recommend whether one has been accosted by gypsies or not.
Because, really, the most important thing I'd like you to pull away from this, dear reader, is:
Eat, Pray...and avoid Gypsies!
Labels: austenesque girlebooks.com jane austen nachtsturm castle very gothic travelogue
Reactions:
Emily C. A. Snyder
Artistic Director and Co-Founder of TURN TO FLESH PRODUCTIONS. | Author of "Nachtstürm Castle," "Niamh and the Hermit." | Playwright: "Cupid and Psyche," "Math for Actors." | Classical director and educator.