It's been a Tempest-y sort of day, as we near the mid-point of the process.  And I thought I'd share the current poster draft and some of the doodles here! 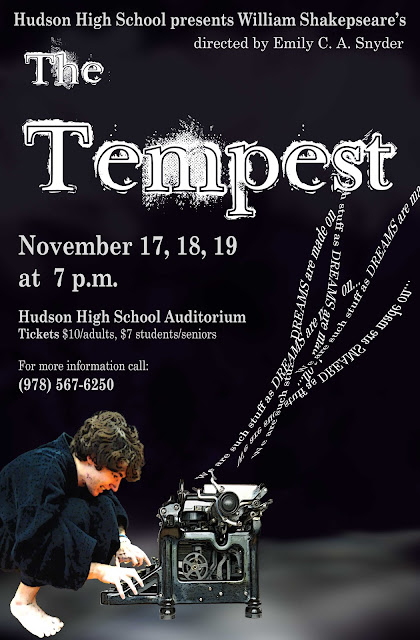 The poster should make it apparent that in our version, Prospero is writing the various people who are storm-tossed on his island.  For us, everyone we encounter in the various story-lines are either from Prospero's imagination (Caliban, Ariel, Sprites), or his past (the nobles, the drunks) - so that only he and Miranda are real. 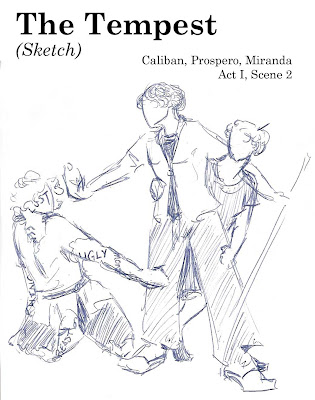 Therefore, those who are born from Prospero's mind will have words written on them.  But as Miranda enters the story of the world, she is "lost" in it - written into the pages - another person lost to Prospero's art.  (You can see more about the original character ideas here.)

I'm not sure yet how the story ends.  We've thought of Ariel and Caliban taking the roles of Miranda and Prospero respectively by the end.  We could just let things be beautiful (but this is turning out to be a very ambiguous play, and while there will be beauty, it will not be comical).

Regardless, I'm honoured to be working on this play.  I must admit that I'd picked it almost at random: my original choice worked better for another year, and others that I would have liked to do had been performed in recent memory.  But Providence is good and I'm discovering that this Tempest is quick becoming one of Those Plays where every rehearsal is breathtaking, powerful, lovely, and intense.  The actors are all very respectful of the show - although I think we need to laugh even a little more, guys! - and I'm humbled and excited by the suggestions, intelligence, and passion with which they're approaching the world we're creating.

One of the things that's been most exciting and new, for me, has been working with a musician who is underscoring the show, creating original leitmotifs (themes) for the various characters or groups of characters.  He adds so much to each rehearsal, creating combined themes at the drop of a hat - or the occasional Jaws parody! - and really helps the action of each scene.  You can hear some of his work on his youtube account.  Hopefully, you'll be able to hear the Prospero theme (which shifts each measure from 5/8 to 6/8 and is ah-mah-zing!) soon! 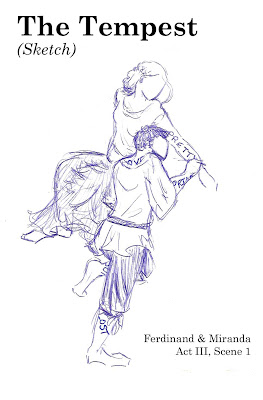 What's also been incredible are the improvs which the actors have done to create the backstory of the world.  The nobles in particular delved deep - basically improving an entire play which deserves to be written out, involving love, betrayal, politics, madness, murder, redemption, power, obsession, birth, marriage, and the outbreak of some sort of earth-devouring plague.  What's perhaps even more remarkable is that all that we've created can be sustained by the Bard's work.

Caliban, Ariel and the Sprites, too, have made their characters so much more than the one-dimensional ideas that they can sometimes be played as.  The thought - based, I'll admit, on Oscar Wilde's The Picture of Dorian Grey - is that every bad or evil or shameful thought, Prospero forced into Caliban, while every higher ideal he framed into Ariel.  However, they both began as a single imagination (Cariel, if you will), and as they fight for freedom - that is, for being independent of Prospero's reign - they eschew some of the words with which they have been labelled.  Many of the drunk scenes, therefore, which aren't terribly funny (I mean, c'mon Bill, you can write better comedy than that!) end up really being scenes of rebellion and power struggle between Caliban and Ariel - and ultimately Prospero.  It's fascinating to watch, and once again, Shakespeare's work is so elastic that the story is not bent, but illuminated.

One of the things that often bothers me about Bill's work, if I may take him from his pedestal, is that often his comedies - save, perhaps Midsummer Night's Dream and A Comedy of Errors - are really fairly weird collections of scenes.  His tragedies, even his histories, are driven very much by plot, but many of his other works start off well and then meander.  Since this is a personal pet peeve of mine, I like to find the thread that ties the works together (as best I can) - and in this case it's the omnipresence of Prospero in each scene - actively striving to maintain grip on his power, actively being worked against as his characters come to life against him.

We haven't yet gotten to the part where everything goes to Hell, and all our heroes are villains, and all our villains are sympathetic, nor have we gotten to Act V when the more courageous act of forgiveness is made, but I'm excited to see what comes out of these wonderful actors and generous crew once we get there!