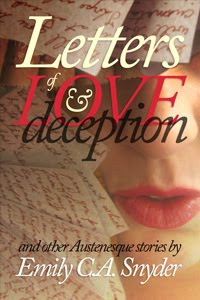 Just a few more days left to purchase Letters of Love & Deception on sale for just .99 cents from Girlebooks!

Don't have time to read an entire Jane Austen or Austenesque novel?  Never fear!  Letters of Love & Deception draws from all of Austen's completed novels, peeking into the corners of her stories, to delight both the casual and most devoted Janeite!

You can read an interview about the stories here.  And to whet your whistle, here are a few excerpts:

Pride and Paraliterature
(Pride and Prejudice)
An homage and satire of monster mash-ups, proving that Mr Darcy's worst nemesis is still Miss Bingley! 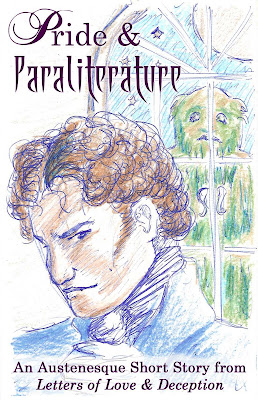 He brooded as he slunk, swathed in layers of cloak and cravat, through the halls of Pemberley. He brooded as he crept along the portraited walls of his ancestral home, nimbly dodging those few stairs that creaked, and Mrs Reynolds who was likewise arthritic. Past Georgiana’s pianoforte, he brooded; past the writing desk, littered with failed attempts at poetry, he brooded; past the tall window where a swamp monster lurked – (and catching a glimpse of Darcy’s smart coat, felt woefully underdressed, and slunk off into the night), – Mr Darcy brooded.

And returned to the window. Where the swamp monster wasn’t.

And so he returned to brooding.

None But You
(Persuasion)
Aboard the Laconia, Captain Wentworth writes the first version of The Letter.


‘Dearest Anne,’ he had written—but no more. ‘Dearest Anne,’ as though the conjoining of those two words encompassed all his heart. He had not got beyond them—no sooner had they been written than his hand had trembled, and he rose to pace anxiously about his cell. ‘Dearest Anne’—too intimate too soon, not expressive by half. Had he dared to write more than those two words he should have named her ‘sweetest Anne,’ ‘loveliest Anne,’ ‘beloved Anne,’ ‘my Anne...’


Isabella Thorpe should have been a thing of beauty, silhouetted as she was within the narrow room—but there was something sinister about her lip: a sense that it had been too much abused with kisses, a shadow of ill-news in the corner of her smirk. No Gothic heroine torn between two lovers, or happily fainting into some villainous arms, or happy at the last in the conclusion of her novel, smiled such as she. But then, no one who had ever seen Isabella Thorpe would have supposed her to be an heroine.

Miss Bates' Something Blue
(Emma)
On the eve of Jane Fairfax's wedding, Miss Bates remembers her own lost love.  This entire story is available in excerpt here or you can hear an audio version (see below)!