A Very Gothic Travelogue: F*(% Off and Other Actually Useful Phrases

When travelling abroad, it's helpful to bring along a dictionary of some sort (particularly if one is forced to threaten over-amorous suitors at gunpoint).  However, it's even more helpful to pick up key phrases in the various languages of the countries you plan to visit, which I learnt quickly when I spent some time travelling through Europe in the Autumn of 1997 - and which helped me out when writing Nachtsturm Castle, which travels through so many European countries!

The semester I spent abroad, my home base was in the little town of Gaming, Austria, at a converted Carthusian Monastery (the Kartause, see below), which is owned by my Alma Mater.  My room faced the foothills of the Alps, where mountain goats regularly frolicked a few feet out my window!  If ever you get a chance to go to Europe, don't neglect Austria! 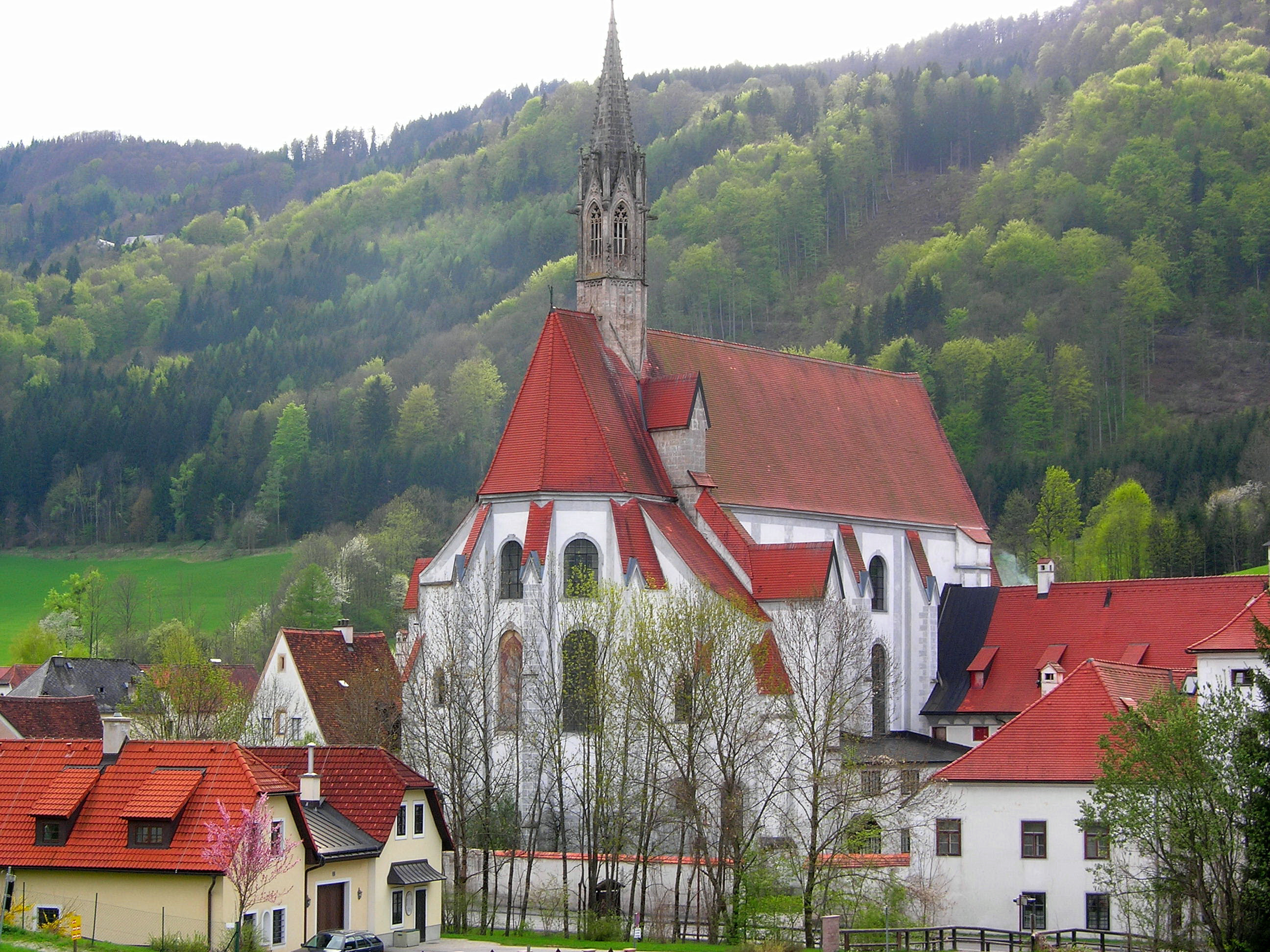 What I didn't realize before I lived in Austria was just how central that nation is to the whole of Europe.  I had originally wanted to study in France (the language I'd studied) or England (the nation I -philed).  I was terribly snobby.  Even though I knew, thanks to my mother, the brilliant genealogist and resident historian, that the heart of the Holy Roman Empire post-Charlemagne had been situtated in Austria, all I ever thought it was good for was being overrun by the Nazis in The Sound of Music.

However, if you're in Austria, you can reach pretty much every nation in just an overnight train trip.  We would study for four days and then have three day weekends, which meant that I travelled all over Austria, to Poland, France, Italy, and a quick stop in Germany - while others on the campus added Romania, the Czech Republic, Switzerland, and Belgium to their passports.  We also had a ten-day trip, wherein I went to France (where I met gypsies and was not abducted in Paris - full story on that forthcoming!) while many others went to Spain, Portugal, Greece...and some considered going to Moscow, which they reckoned they could just make in ten days, if they spent five days travelling by train, got off on Russian soil, and turned right around to catch that same train back to Austria!

As a consequence, it's a good idea to pick up various phrases in various languages, since while most everyone speaks English now, it's a good idea to greet a shopkeeper in his native tongue to get anything approximating decent service.  (And not look like a boorish American, which you look like anyway because you're loud, enthusiatsic, and have a backpack the size of China.)

So, I'd like to present you with a List of Helpful Phrases for your own jaunt through Europe!  And if you pass by the Kartause, wave for me! (Most words spelt phonetically.)

Polish
We learned these two phrases on our first trip that wasn't sponsored by the school.  For whatever reason, the train was absolutely packed.  Everyone who was anyone was going to Poland that weekend!  Somewhere around two a.m., two Polish students took pity on two of my companions and gave them space in their compartment, where they also taught them the above phrases.  They in turn taught us, and we used those two phrases to speak to everyone in Poland, meaning, variously: 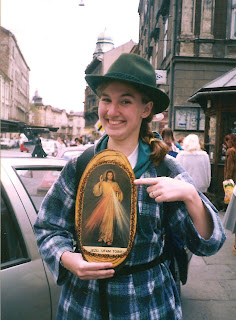 This last one is the most helpful phrase I can give to you, because it means the same everywhere.  Also, word to the wise: seek out McDonald's toilets.  They're clean, they're free, they're not weirdly-fangled.  It's like stepping into the universal American embassy.  The only better toilets are in the Vatican.  Seriously.  Beautiful.  But I digress.

German
Fortunately in the latter case, the nice Austrian couple (who had given me a lift because I looked really Austrian - I've got one of those universally northern European faces - and I was wearing a kerchief) realized as soon as I got in the car that I was not Austrian.  They had begun chatting at me, and I said, "Entschuldigung.  Ich bin Americanerin.  Ich sprache ein bichen Deutch.  Danke danke. [Pointing at my guy friend.] Mein mann!  Danke!"  They were very nice and 1) didn't kick me out and 2) picked up my guy friend and 3) didn't laugh at the fact that I'd just apparently called my guy friend - who was studying for the priesthood and is now ordained! - "my husband" when he clearly wasn't.  God bless that Austrian couple! 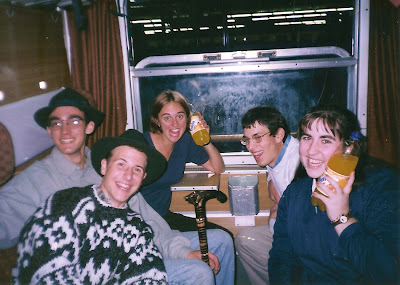 Having a generally European-looking face and a fair ear for accents can be helpful, but it can also pay to have a very American look and thicker American accent.  Because on that first trip to Poland, when the six of us were looking for compartments, I got stopped by this very Prussian looking train conductor and asked something that sounded to me like, "What's going on here?  There's a compartment with a few open spaces there!"  I panicked, and said, while fleeing, "Ich weiB nicht.  Oh!  Mein freunds!  Entschuldingung!  Danke!"

A little later, while we were all crowded into a hallway (well, the guys and myself - the other two girls were chatting up the Polish students!), the German Trainconductor of the Cheekbones that could Chisel Glass, caught up with me and let off a long stream of German about Heavens knows what.  I listened blank-faced, and then said, in English, "I'm so sorry.  I don't speak actually speak German."

It's not politically correct to do so, but the Look he gave me afterwards made me almost positive that this Arian Adonis was going to go all Third Reich on me, but instead he just clenched his Square Jaw of the Gods, and left.

For the record, I've decided that he was hitting on me and I broke his heart.

Because, if not, I'm pretty sure that he was inviting me to wear the swastika.

In either case, sometimes you should throw the dictionary out the window to begin with.

Mostly, I know how to sing in Italian.  Which isn't very helpful, except when you're actually in Florence by the River Arno and the Ponte Vecchio and you can belt out O mio babbino caro which references both places...even if your aria is interrupted by (no joke) a Hari Krishna parade.  (Oh, the wacky world of travelling!) 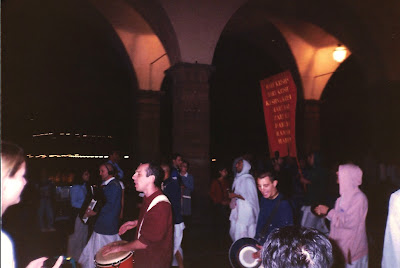 However, here are some helpful phrases!

My French accent is apparently very Parisian, which brings with it a whole adventure - that I'll get to next week - but in the meantime, I'll give you some basic phrases that will help you out quite a bit: 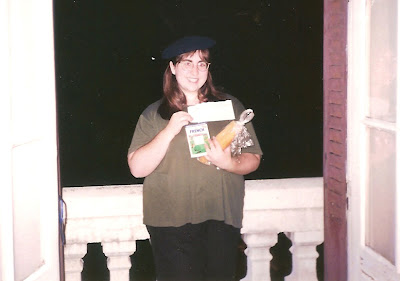 And now, because the men of France are amorous.  Do not say "Oui" to "Voulez vous couche avec moi ce soir" but rather say:

And, what every delicate young woman should know:
So what other phrases should we add to our lexicon!  Leave a comment and let us know!
Labels: austenesque girlebooks.com jane austen nachtsturm castle very gothic travelogue
Reactions:
Emily C. A. Snyder
Artistic Director and Co-Founder of TURN TO FLESH PRODUCTIONS. | Author of "Nachtstürm Castle," "Niamh and the Hermit." | Playwright: "Cupid and Psyche," "Math for Actors." | Classical director and educator.