Tempest: This is the Way the World Ends


As Prospero, the exiled Duke of Milan, nears the end of his life, he reflects on his life—his regrets and his revenges—and he brings to life through writing and his imagination a tempest which shipwrecks his enemies with him on his island. However, his assistant, Miranda, whom he regards as a daughter, chastises Prospero for his hatred.  He explains that he has just cause: his sister Antonia, along with help from Alonso, the King of Naples, and his sister, Sebastian, overthrew and exiled Prospero. 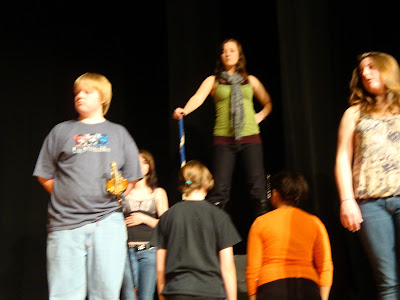 Miranda remains unconvinced of Prospero’s right to revenge himself upon the dead, so Prospero summons his muse, Ariel, and her sprites, and commands them to bring to him Ferdinand, the illegitimate son of Antonia and Alonso, as a present for Miranda. Ariel tries to barter for her freedom, which angers Prospero.  He sends out Ariel and her sprites, and waking Miranda, he summons up his demon, Caliban, into whom Prospero has put every wicked thought he’s ever had. Caliban curses Prospero and also demands release; but Prospero beats Caliban and puts him back into his box. 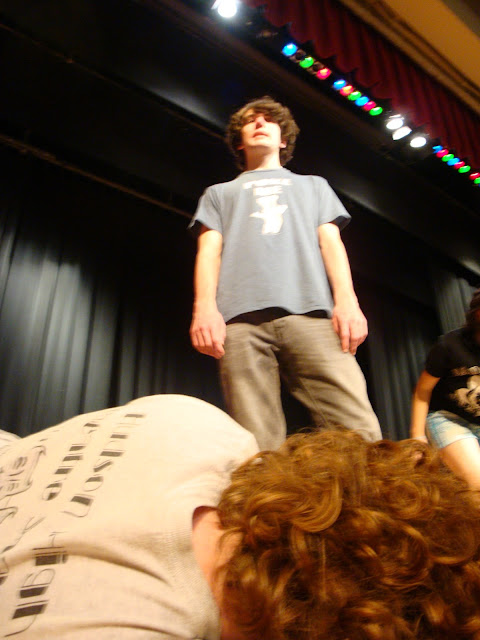 Just then, Ariel returns with Ferdinand. Miranda is immediately entranced by him, raising feelings of jealousy and resentment in Prospero.  He decides to make their wooing difficult, and writes in obstacles to their courtship…but Miranda counter-writes, imagining the romance to have a happy ending. 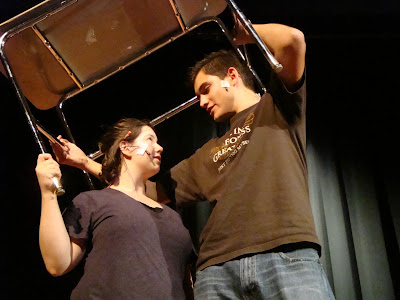 Frustrated, Prospero summons on the nobles to exact his revenge. They have been searching for Ferdinand, sure that he is dead by Prospero’s storm.  Gonzalo, a good lord, attempts to lift their spirits, to no avail. At Prospero’s command, Ariel puts everyone to sleep, except Antonia and Sebastian—who quickly conspire to kill Alonso. Before they can, Gonzalo wakes and warns them all to act more virtuously. 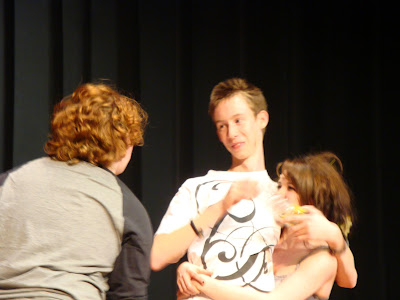 Meanwhile, Caliban plots his revolution. He meets two drunks, Stephano, Alonso’s butler, and Trinculo, a lady of the night, whom he declares he will worship…if they will help him kill Prospero.

INTERMISSION
Despite his efforts, Prospero begins to lose control of his creations and memories, as they take on lives of their own. Miranda declares her undying love for Ferdinand, and he returns it in kind, marking Miranda with a word and drawing her away from Prospero. Caliban turns many of the sprites against Ariel and Prospero, promising Stephano that he can marry Miranda and become king of the island if they destroy Prospero and his books. So when the nobles enter, unbidden, Prospero takes out his fear and madness upon them—setting Ariel and her sprites upon them like a harpy, while Prospero threatens to kill his sister. 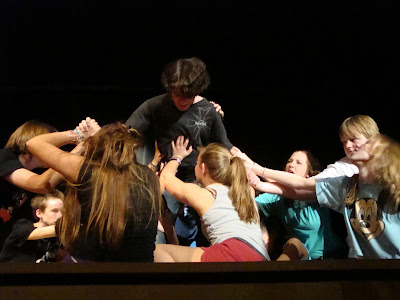 Just then, Prospero realizes how close to a terrible edge he’s come—and he flees. His memories and imaginations dissolve, except for Ariel who waits for Prospero to return. Her faith is rewarded, as Prospero takes up his power one last time, but now to forgive and beg forgiveness. He gives his blessing to Miranda and Ferdinand’s marriage. He only scares away the drunks when they come to rob him before he’s in his grave. And he calls on all his wayward sprites and all his worst enemies to reconcile. 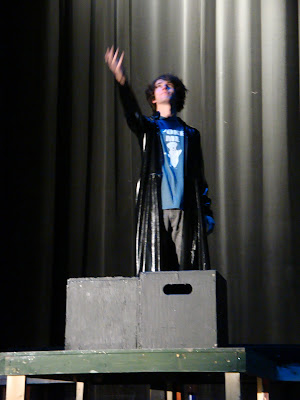 One by one, his memories, his imaginations, his devil, and his daughter leave him—until he is only left with Ariel. Sadly, he gives his angel freedom. Turning to us, Prospero begs us for our prayers as he leaves his exile and the storm departs in dawn.

For more photos, please see here or here.  If you're near Hudson, MA on November 17, 18, or 19 at 7 p.m., please come out and see us at Hudson High School!
Labels: death directing tempest upcoming plays william shakespeare
Reactions:
Emily C. A. Snyder
Artistic Director and Co-Founder of TURN TO FLESH PRODUCTIONS. | Author of "Nachtstürm Castle," "Niamh and the Hermit." | Playwright: "Cupid and Psyche," "Math for Actors." | Classical director and educator.