This is my brief bio for my application to Columbia's MFA in Theatre Directing.  I think it says it all!

I became a theatre major on a dare.

I took that theatre course—fully intending to roll my eyes—and instead, I fell in love.  Here was a place to challenge me; here was freedom in discipline; here was all the world in miniature; here, simply, was home.

Immediately, I changed my major from Creative Writing to Theatre, with an emphasis in Directing.  My muddled thinking was: “Theatre is such a ridiculous and impractical profession.  I’ll take it in college, because clearly no one actually makes a living in the arts!”

Which only goes to prove that God loves good dramatic irony. 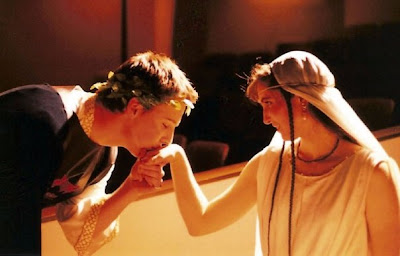 Salome at Anathan Theatre in 1999

My Senior Thesis Project at Franciscan University of Steubenville

My first teaching position out of college was for a K-8 private school.  There I taught both music and art, and was informed that I would direct and produce The Wizard of Oz, with no budget, no script, no support, and all 425 students participating.  I had 72 Munchkins.  (And 64 cornstalks, 64 poppies, and the fifth grade boys were typecast as flying monkeys.)  At one point, while making poppy headbands out of wire, red paper, and glue, I was watching a documentary on the making of Riverdance.  A voice over in a posh British accent drawled: “At one point I had ninety actors!  NINETY!  I had never worked with a cast that large.”  I threw my glue sticks at the TV and cried that I would kill for ninety actors!  I went each day to tech, chanting to myself: “If you can survive this, Emily, you can survive anything!”

I guess I did.

More than ten years later, I am still a professional director, educator, author and playwright.  I have taught theatre to students ranging from ages seven to seventy, in formal classrooms, seminars, and rehearsals.  I’ve directed almost fifty productions, founded three unique drama programs (two in schools, one independently), and expanded a fourth.  I have written and had produced over fifty plays, four of which are published with Playscripts, Inc., and which have played from Chicago, Illinois, to Dublin, Ireland, to Christchurch, New Zealand.

In 2000, I studied Shakespearean verse acting with former members of the Royal Shakespeare Company in London and Stratford-upon-Avon, England.  In 2006, I founded my own summer Shakespeare company, Gaudete Academy, for adolescents and young adults.  In 2009, my first five act iambic pentameter play, Cupid and Psyche, premiered in Boston. 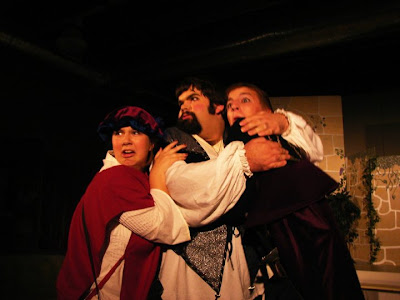 Grumio, Lucentio and Petruchio brave the crazy wedding party
in Gaudete Academy's 2010 production of The Taming of the Shrew

I have yet to be saddled with another cast of hundreds, but I have had the transformer blow half an hour before show and the show still go on with audience members holding flashlights (French Butler).  I’ve had my cast plagued by walking pneumonia (King of Fools), performed despite African weddings dancing loudly above our heads (Taming of the Shrew AND As You Like It), and created rules for rowdy adolescents, such as: “The furniture is not for fun" (Tempest).

I’ve also had the privilege of putting on some damn fine plays—plays that still live vibrantly in my soul, and which to return to is the essence of ‘bittersweet.’  It’s a strange thing to create a world and then destroy it.  But beautiful, too.   And I wouldn’t dare change it.
Labels: as you like it cupid and psyche directing gaudete academy king of fools playscripts inc. salome taming of the shrew tempest william shakespeare wizard of oz
Reactions:
Emily C. A. Snyder
Artistic Director and Co-Founder of TURN TO FLESH PRODUCTIONS. | Author of "Nachtstürm Castle," "Niamh and the Hermit." | Playwright: "Cupid and Psyche," "Math for Actors." | Classical director and educator.