The Terrible Temptation to do Good

1) Hook - The Cool Thing that gets you into the story; think the dead body at the top of any cop show

2) First Plot Point/Inciting Incident - The thing that gets your character into the story; the call to quest

4) Second Plot Point/Reversal - When, because of the villain, the hero is pulled from reaction to action

6) Climax - Where our hero Heroes and All The Things Happen 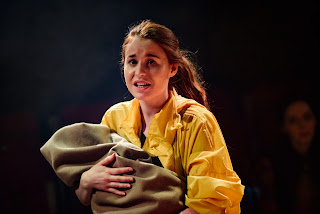 Now, what I've REALIZED while outlining my current major works is that all my pinch points aren't where the villain enters...but the saint. I've always loved Brecht's quote from THE CAUCASIAN CHALK CIRCLE:

"The terrible temptation to do good."


And I think there's something inherently more HONEST about looking at stories where our protagonist is attempting to choose between two lies, both presenting themselves as truths, and then to have their lives disrupted by the unwelcome intrusion of Grace.

And what does it say that we look at Truth and shout: "Villain! Villain! Take the Light away!"