Frilly Curtains in a Post-Apocalyptic World

With all the Sturm und Drang surrounding #MeToo, and with even Margaret Atwood being taken to task for being a "bad feminist" because she calls for justice rather than retribution (although reparation is never a bad thing, bravo to Dan Harmon and Mark Whalberg), and as we suss out new social norms that call for respect rather than exploitation (trigger warnings as I'm looking pointedly at you, James Franco and Aziz Ansari), I want to talk about what truly matters:


In a post-apocalyptic world, there will be frilly curtains. 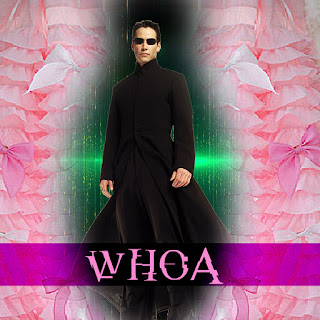 The first moment I knew I couldn't trust The Matrix movies - well, ok, the umpteenth-million-time I knew - was at my first glimpse of the sole remaining human city, bearing the extremely subtle name of Zion.  Which, to be frank, looked like pretty much every post-apocalyptic city Hollywood has ever dreamed up, which is to say: plain, drab, grey, angular and entirely without curtains.

"Ah well," I thought.  "They are probably new refugees to this city.  They've only just arrived."

But no, I was told by the movie in no uncertain terms, Zion had been around for at least a few generations.

"Ah," I thought, "perhaps Zion somehow has...no families?  No children?  No women?  Perhaps everyone is a soldier, and Trinity is merely part of the Smurfette Principle?"

But no, the movie showed me, not only had Zion been around for a bit, but there were families who were more likely to staff the proverbial Death Star Canteen than man the battle stations.


"Then surely," I thought at the film, nearly rising from my chair with revolutionary zeal, my unfurled flag gripped firmly in anticipation of five-part, flash mob singing (which is the only proper way of declaring independence, as every student of popular culture knows).  "Surely," I thought with growing fervor and the certainty of a thousand Pinterest boards.  "SURELY, there must be curtains!

"After all," I declaimed silently at the screen, while all around me fanboys and girls slept in the velvet seats and dreamt dreams where they'd gone to see Lord of the Rings instead, "after all, although I - a woman - am not normally a nester by nature, yet even I, when confronted with the drab cement wall of the public school system; even I, who would rather stab my eye out with a needle than use one to mend a sock; even I who, when enslaved by the padded walls of the soul-sucking cubicle at least have colored push-pins; EVEN I, to whom Home and Gardens is anathema and kitch is cause for immediate ostracization; even I would have made a damn flower out of scattered bits of paper and put up SOMETHING CUTE.

And so yea, and verily, and by all that is holy, and by everything true, I say unto those who cower in the thought of impending personal apocalypses for those who wallowed in the depths or shallows of sexual predation:

Look up!  And be of good cheer!  We bring great tidings of good news!  For unto ye, there shall be curtains.

Check out: "The Greatest Showman and 'The Other Woman'" and
"Star Wars: The Return of the Stakes; or the Failure Frontier"
Labels: #metoo Buffy the Vampire Slayer Eddie Izzard feminism les miserables Lord of the Rings Pop Feminism popular culture sexism Smurfette Principle The Matrix Time's Up Tolkein toxic masculinity
Reactions:
Emily C. A. Snyder
Artistic Director and Co-Founder of TURN TO FLESH PRODUCTIONS. | Author of "Nachtstürm Castle," "Niamh and the Hermit." | Playwright: "Cupid and Psyche," "Math for Actors." | Classical director and educator.