Let There Be Light: Performing Beauty When the World Seems Worst 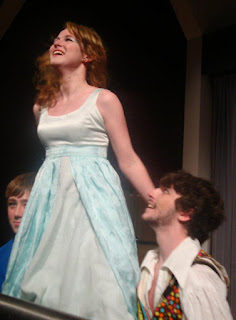 The young girl, a high school student from a well-known drama program in direct competition with our own came up to our stage manager, tugging on her arm.

The stage manager, a high school student herself, turned around.  "Yes?"

The young woman went on to explain that she was best friends with the lead actress in her own school's play, which was a dark, semi-classical piece about violence and rape.  Apparently, this girl had been helping her best friend out with the psychological repercussions of embodying that role night after night, week after week, month after month.  This was an award-winning school after all and, true to form, their dark play continued on for several months after this encounter, trudging its bleak and psychologically challenging way through to the state finals.

Our show didn't get anywhere near that far.

We were touring The Light Princess, my stage adaptation of George MacDonald's fairy tale novella (now available from YouthPLAYS).  Already we had performed at our home base, and now our scrappy troupe was taking engagements at the local elementary and middle schools, and bringing it to the local drama festivals.  Armed with very few props and costumes, pulling off flying and swimming and magic with low-tech practical effects, all underscored by the brilliant composer and pianist, Taylor Benson - himself only a sophomore at the time!

We knew that our show wouldn't win.  We didn't build an entire set in three minutes, and there wasn't a single rape or "edgy" piece of material to be found.  We had puppets and bubbles and ran through the audience with dragon heads on...

But we made women fly.

And, it turned out, that's exactly what the audience needed.

That high school student wasn't the only one who approached our troupe during our tour.  Perhaps my favorite response was from a five year old girl who watched one of our performances, sitting on the edge of her seat and gripping her mother's hand while the Light Princess did aerial acrobatics, aided by the other actors, laughing all the while.  The little girl - and I know her, I was her - gripped her mother's hand and loudly whispered:

"Look, Mommy.  The princess is flying!" 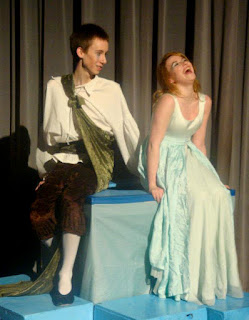 We didn't move on from that competition either.  But we didn't need to.  If we had only ever performed for that one little girl, I would have been happy.

Writing, directing, producing and touring The Light Princess was one of those wonderful experiences, when you know that what you're doing may not be technically impressive...but it's deeper, it's richer than that.

But ultimately, as it says at the end of the play:

PRINCESS. (Falling down.  She has never used her feet before.)  Ugh, and I suppose this is your wretched gravity?

Become my patron on Patreon!