A Room Full of Apathy: Being Sexually Harassed in a Starbucks 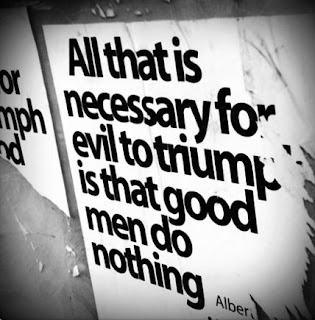 Note: This is taken verbatim from a FB post I shared the night it happened.

1) I bought a new to me long sleeved black shirt to go under dresses because I'm so out of clothes, and what I have is summer apparel.

2) Simultaneously, I felt bad this morning because I'm in another plateau of weight loss. And my thought was: well, I guess I'll just stop here. Fat has kept me safe thus far. (I immediately dismissed that, and flagged it for my, "Chat with therapist" file. Still. "Being fat," in my mind, HAS kept me as less of a target. And "getting skinny" has made me worried that I'll be subject to greater assault.)

3) Fine day. Good, even. I wore my new tights. I wore my kicky boots. Black long sleeved blouse. Red and black dress. Red Victorian pea coat. I looked cute. Noticed a sketchy old man in flip flops staring at my legs as I walked to the train. I put on my best scowl. Didn't dissuade him. Literally SNAPPED my fingers to pull his eyes to my face. He looked up. And then back down. I crossed the road and quickened my step and cursed this fallen world. Happy to see a Dad with his little girl pass me by with barely a glance. Still.

4) Received a few compliments about my outfit from a friend, from a colleague. These were fine. One at the parish said: "Christmasy!" I marveled at how the same appreciation can be so vastly different. How easily intent is known.

5) Went to "my" Starbucks. Had a great TTF meeting, then a good few hours brainstorming the never-ending novel, and looking up word etymology, when...

6) A drunk, older guy comes in. Reeking. HUGE open Corona in his hand. He looks around. The just announced Starbucks closing. It wasn't very full. He sits down right next to me.

I start packing up anyway. I give him The Eye, which is usually enough to get anyone to back off. He says something. I answer that Sbux is about to close. He responds:

ME. (Holding up a finger. Looking him in the eye.) No.

DRUNK. You can't take a compliment? You don't want me talking to you? You've got nice arms. (Etc. etc.)

I get nervous and pack up quicker. I don't know if he's going to get violent. He reeks. He's inched towards me.

There's a well-dressed young man on the other side of him. He says nothing. There are two middle aged gentle looking Dad types at nearby tables. They see, and are also silent. The man is still going on. No one helps. I stand up.

ME. (Going to the trash, in the middle of the store. Looking around. Raising my voice.) THIS MAN IS HARASSING ME. He's a drunk, and with everything in the news, is NOBODY going to do or say anything?

(Aside: Oh, dude. No. No no. Moving is not the key. YELLING at the man and removing HIM is the key! What the what?!)

DRUNK. (Louder now.) All I said was you got nice arms? You gotta make a scene? What, you a prima donna? You're a prima donna, lady? I'm *complimenting* you...

Fortunately, just then the young Sbux manager, who has gages in his ears, came up and got the man out. Not correcting him, but just saying he couldn't be in there. He also apologized to me. Really sweet. He used his body - and he was slighter and younger than the heavy drunk - and got the guy out the door. Only one who helped.

Turning back to the still-useless dudes, one sleepy Dad says: "Well, at least the manager removed the guy. Most of them let them stay." No mention of ever doing anything HIMSELF, that man when he sees, apparently, this behavior ALL THE TIME.

Everyone leaves. I'd been planning to go grocery shopping, but hail a cab instead. So now I'm more broke with less food - and that's collateral damage from this guy, too. And damage because ALL THESE GOOD MEN LITERALLY FUCKING SAT THERE AND WATCHED IT HAPPEN. EVEN AFTER THEY'D BEEN DIRECTLY ASKED FOR HELP.

And part of me thinks of never losing weight or dressing nice again. Or going to that Starbucks.

...And you wonder why I'm so flipping mad lately. But I was shaken, and I was targeted, and I was just minding my own business and I'm afraid this behavior will only increase and the power of my scowl will decrease as I lose weight, and reading this back I even think: "Oh, I was overreacting," but

YOU DON'T GET TO MAKE ME FEEL UNSAFE.

AND I WISH I'D MADE ALL THOSE LAZY-ASS MEN PAY FOR MY CAB.

AND I CAN'T BELIEVE ONE FUCKING DRUNK SCARED ME ENOUGH THAT I DIDN'T BUY MY G-D GROCERIES.

THIS IS REAL, PEOPLE. 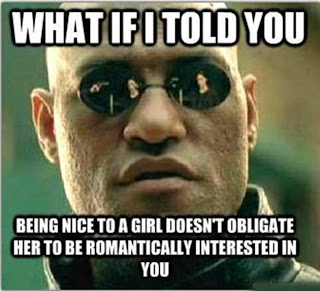 ADDENDUM from a week later: It was interesting to see the response of men and women to my thread.  And it was this that convinced me to make this thread public.

On the thread itself, most of the men were kind.  One rich guy postured about his own prowess, and I rolled my eyes and tried not to hate men.  And then, a household brother of mine, the father of a large family and a fellow Catholic wired me some money - no posturing, not even a note.  Just: this is what you need.  I will help you and not need credit.  I broke down in tears and immediately thanked him.  He never liked or even commented on my thread.  Just did what needed doing from his own poverty.

A girlfriend of mine asked to share my story.  She's sent back a lot of encouragement from other women.  I appreciate that.  And I've had many girlfriends give me some great advice.

Another friend, a good man, was speaking on a related issue with several conservative-Christian brothers, saying that after searching his own heart, he was afraid that his own fear wouldn't have made him stand up for a woman in my situation.  And that he wanted to change that reaction.  These supposedly God-fearing men then started bashing on feminism for ruining everything for men, and my friend's mouth hung open at the flip side of misogyny.

So, I'm sharing this post.  Because, as one friend said:

The greatest crime there was the room full of apathy.


In reflecting back on this experience, with friends, with my therapist, it strikes me that what is needed from men and women is courage.  I had courage in that moment, even if I needed to run away a moment later.  (I'd call that wisdom in retrospect, too.)

Those men who just sat there, though, who boasted about always sitting there, who invited me to stay seated there - those men are cowards.

Those men who blamed courageous women, calling them feminazis, from the safety of their "God-fearing" pious-ish-ness: they are cowards.

Those men who posture and say, "I would protect you, were I there.  If only you were brave, Emily, like I am!"  And then do nothing.  They are cowards.

That man who simply stood up and got the drunk out.  He's a hero.  He may have been shaken after, too.  I imagine he was.  But he was a hero.  My household brother who helped me out financially.  He is a hero.  He is courageous.  He actually trusts in God's providence.  He is actually doing God's work.  My guy friend admitting his own soul searching: that's courage.  That's heroism.  That's action.  That's doing good.

And if I want to continue to be courageous, I need to keep losing weight - not for you, for myself.  For my health.  If I want to be courageous, I need to keep being ok with looking nice.  Again, not for you, but for myself.  Yesterday, I dressed up for the Feast of the Immaculate Conception.  Once again, my legs were visible in leggings.  (I've got great legs.)  Once again, I saw a random dude look me up and down.  I shuddered inwardly and scowled at him.

Dear God, for the love of all that's holy, Men!  Can you please realize the COURAGE it takes for a woman to be simply visible??!?!

Because you know what would be nice, gents?

If I wasn't in danger from you, because I decided to wear a dress.