The Great Comet and the Impossible Star

So, if you're one of the people who follows me on Twitter (@emilycasnyder) you've probably seen the hashtag: #PitchWars quite a lot on my feed. What is #PitchWars, you ask? (Or maybe you don't, but you're reading this anyway, so you might as well know.)

Essentially, it's a way of pairing writers with mentors who work on the completed manuscript (MS) with the author, and then assist them with pitching to agents. Many people are able to land book deals through this process. And the community of authors, agents, editors, etc. reaching out and encouraging each other on is vibrant and loads of gif-ly fun to follow.

I had originally thought of using PitchWars to spur me on to finish my novel, THE SABLE VALENTINE in time to submit - but as I worked on the MS, it quickly became apparent that this simply wasn't going to happen. Still, I participated in several first chapter swaps with other authorial hopefuls, receiving critique on my work and offering feedback on theirs.

HOWEVER(!), I found that after about 75% of these reviews, I was almost cripplingly disheartened by my own work. Even if the other author said nice things, the news frequently came back: "But how is this COMMERCIAL? What IS this? There are PICTURES, and a *lot* of worldbuilding, and is it a history? Mystery? Fantasy? Romance?" To which I wanted to whimperingly respond: "Yes? It's all?" Or again, I was generally lauded for my writing style, but with the caveat: "But your sentences are so LONG. Modern audiences can't read that. You know this." Then on their profile they'd go off about the latest classic novel they were reading. Which novel, I should like to point out, might have sentences lasting an entire *paragraph* long.

Those who were most adamant about "the rules," (e.g., You only have 10 pages to draw the agent in; you must use THIS phrasing in your query and no other; you must fit within the norm) were also, I noted, recent students. Which is to say, they were still living in a world of standards and grades.

Regardless, I am finding that in terms of this particular artistic baby, I am becoming more and more protective. Akin to the agony and the ecstasy of birthing CUPID AND PSYCHE. (Only this one is, in terms of pure word count, only going to come out by literary C-section.)

In the middle of this, I went and saw The Great Comet. And I think it was something of seeing a piece of art that Should Not Exist, that so gloriously, vibrantly, insanely DID exist: pounding, thrumming, dancing up beside me in all its baroque electronica that spoke something to my soul. The Great Comet is an opera. It is a novel. It is a play. It is an electro-pop rager. It doesn't rhyme. It sidelines one of its titular characters and then gives him the finale. It MAKES NO "COMMERCIAL" SENSE.

Lin-Manuel Miranda's HAMILTON has now so embedded itself within our collective consciousness that we almost forget how absurd its premise seemed to be. In their times, too, LES MISERABLES and PHANTOM OF THE OPERA were strange stand-outs, hearkening boldly back a musical century, while employing modern staging and orchestration. They were *sung through,* and PHANTOM was positively rococo in places. And of course, Sondheim has often paid for his sins of remaining true to whatever wacky vision he's composing now. I've listened a *lot* to MERRILY WE ROLL ALONG lately.

I think the reason why these critiques hit so hard is because I feel that *all* the art I do - whether in narrative form, or half the plays I'm writing - fall into this category of "What the HELL, Emily? No one wants THAT!" Which, when you're *literally* counting pennies to see if you can buy food, is a terrifying prospect. 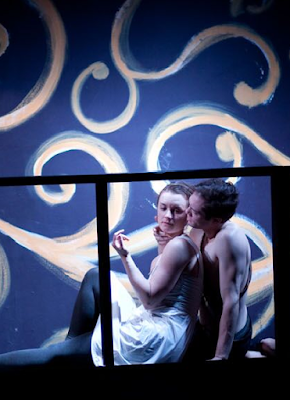 But then I must remind myself, dear friends, that after I wrote my first draft of CUPID AND PSYCHE back in 2009, my dear professor asked me, quite benignly but pointedly: "Well, it was interesting, Emily. But do you think the world really wants new plays in blank verse?" I, being younger and more resilient in some ways, raised my chin and answered: "Yes."

Now, I almost forget to introduce myself as: "Oh, yes. I write plays in blank verse." Bless you all: you do it for me. Bless you all: you also write in blank verse and rhyming couplets and it turns out people are interested after all. And now - in, for example, working on A COMEDY OF HEIRORS - it's just as workaday as ever writing another farce for the folks in Massachusetts.

I write all this to encourage myself. Because there's this terrible Germanic fear that in working on any of these projects I am wasting my life away; I am being irresponsible with the time I have been given; I am chasing after smokestacks, mistaking them for clouds.

Which it to say, it may be time to listen once again to "The Impossible Dream" and weep the half mile home, whispering, "Yes," to Don Quixote whose madness makes the world more beautiful.

I want, dear friends, in my heart of hearts, I shall die happy if I can make a single thing of beauty and give it to the world. I honestly wish for nothing more. Well, that and maybe the ability to pay rent without hyperventilating every month.

"And the world will be better for this:
That one man,
Scorned and covered with scars,
Still strove with his last ounce of courage
To reach the unreachable star"