Wherein Our Heroine Suffers the Trials of a Day Job, and Writes Two Novels Instead

Almost twenty years ago, I'd just graduated from college and was set adrift in the wide world of reality - which is, as anyone who's been there knows, a rather grim place to be.

Since my job literally consisted of me coming in to my isolated cubicle, printing out my boss' emails in the morning and then again in the evening, and otherwise sitting for eight hours with almost nothing to do by a silent phone...I wrote.

At the time, there was a rather bustling community called the Republic of Pemberley: a series of several handsomely maintained chatboards for Jane Austen enthusiasts.  Since I had watched Colin Firth jump into ponds religiously my senior year of college (Pride and Prejudice fitting in nicely with that hotbed of celibacy), and since members of the ROP were eager for stories about the continuing adventures of Jane Austen's characters, and since I had nothing to occupy my brain whatsoever, I wrote a considerable amount of Jane Austen paraliterature.

Which is to say, I wrote two novels (one of which is available, and one of which is forthcoming), and a heap of short stories.  Not being a purist, my stories tended to fall into two categories: behind the scenes glimpses of her characters, and then outright silliness of the same.  Which is to say, a sweet romance about the spinster Miss Bates' long lost love, juxtaposed with all of Austen's villains winding up in the same house on a dark and stormy night.

I'm positively thrilled to announce that this long-awaited collection, Letters of Love & Deception, is now available for pre-order for Kindle.

If you're a Patreon, there's an extra special treat: I've uploaded my favorite story in the book, "Pride and Paraliterature" for your enjoyment.  It's maaaaybe (definitely) a send-up of all those Pride and Prejudice and Zombies and  Cyclops and Martians, Oh My novels.

It's nearly Galentine's Day!  So grab your chocolate and your best tea cup and snuggle up with Letters of Love & Deception!

Want to sample Letters of Love & Deception early?  Become a $5+ patron on Patreon and get immediate access! 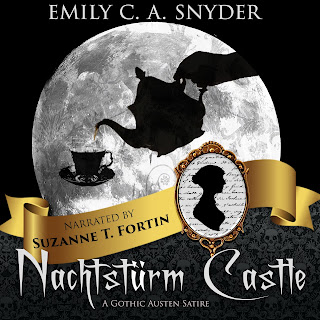 Can't wait?  Need a fix of some frivolity and fast?

Nachtsturm Castle, a Gothic Austen Satire is available now in for Kindle and through Audible.