How Do You Solve a Problem Like Prince Hal?

Of Cabbages and Kings

This blog was first posted over on Patreon, as a companion piece to a review of Hamlet Isn't Dead's production of Henry V.   If you would like to support myself and this blog, head on over to become a patron on Patreon!  It means an awful lot, and allows me to keep writing for you.


...[N]o matter the strength of the ensemble, uneasy lies the play without a lead, and many an otherwise wonderful Henry V  has fallen flat because the war-like Harry was only serviceable at  best.  There is, in fact, a danger to how Shakespeare wrote this  incarnation of one of Britain's greatest kings.  Henry is given enormous  speech after enormous speech - all of them good, but which can  ultimately tax the listener, or invite the actor to play "noble," or  "angry," rather than delving for every nuance.  We forget that  Shakespeare was writing for his leading man, Richard Burbage: the same  man who could milk comedy next to tragedy as either Hamlet or Macbeth.   What is needed for a Henry V to succeed is an actor of similar dexterity.

Who's Ken Branaugh? (A History)


Note: If you haven't seen Blackadder take on Shakespeare, click on the link above.  You're welcome!

My first introduction to Shakespeare came through Branaugh's one-two punch in the mid-90's of Henry V and Much Ado About Nothing.  With the former, I remember being amazed that I was capable of following such a convoluted plot, being swept up by the theatricality of Derek Jacobi's Chorus, delighting in Emma Thompson's lamentably short French scene, and Patrick Doyle's stirring "Non nobis domini."  (Which I definitely just rewatched and blubbered at, at my kitchen table.  What I do for you.)

However, of Branaugh's Henry, I remember little.  He was noble.  He spoke the words good.  He kept my attention.  There you go. 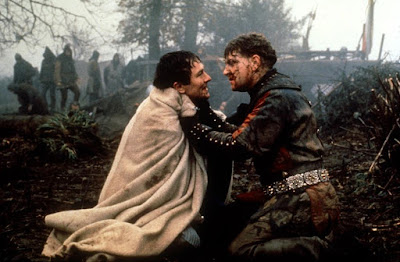 Since that introduction, though, I've had the opportunity to see and participate in Henry V  (and while we're at it, Henry IV, Parts 1 & 2, as well).  None of which - until this production - have come near to what I now recognize as Branaugh's absolute comfort with pretty much any Burbage-created role.

When I had the pleasure of seeing Richard II with Sam West in Stratford-upon-Avon in 2000, he mentioned during his talk back with us that he preferred playing Richard over Henry V.


"There's some trick to the transition from Hal to Henry that I can't understand.  And I'm not sure I want to," was his reply, referring to the wild Prince Hal of the Henry IV plays, vs. his "noble" Henry V evolution.

Since that statement, naturally, I've been fascinated with the question of how to reconcile the contradictions of Harry's character.  Prince Hal is in many ways the easier role to play.  Swagger and braggadocio are always fun to trot out.  And nearly all of Hal's scenes are opposite that scene-stealer, Falstaff, making them the highlight of the Henry IV plays.

The danger in playing Hal lies in gliding over his nobler tendencies, frequently expressed in blank verse, such as in "I know you all," or "Do not think it so."   Often, one can see the nervousness in the actor's eyes for the former, as he feels Hal's promise to leave his wild ways once he is king to be ironic at best, if not downright cruel.  Honor is allotted entirely to Hotspur, rather than also being one of Harry's traits.

Conversely, those actors taking on Henry V seem to universally work hard to remove any of Harry's puckishness.  So intent are they in distancing Hal from Harry, that they'll play straight over comical lines, and shout their way through "Once more unto the breach" or the St. Crispin's Day speech.  Hence, the final awkward wooing scene with Katharine in Henry V can seem to come out of nowhere - as opposed to being exactly how the Prince Hal we knew, the Prince Hal of Eastcheap, Prince Hal roguish son of a usurper king would poorly woo a woman raised from birth to nobility.

Hence, when I'm watching either Hal or Harry, I am always watching with a double vision to see whether the actor has managed to play only an idea of the character, or has done the work to incorporate the seemingly paradoxical natures of Hal and Harry into one, human person.

I must here admit that I have not seen Lawrence Olivier's Henry V, and so cannot comment on it.  Branaugh, I feel, allows very little of Hal's rogue in, although his shooting script alludes to why by showing us Hal's heartbreaking denial of Falstaff from 2 Henry VI.

In the Instant Shakespeare production of Henry V, I had the pleasure of playing Harfleur and Montjoy and pretty much every single non-noble Frenchman.  Which is to say, quite a lot of my job was to give Henry bad news and then wait around while he yelled at me for hundreds of lines at a time.  My experience, frankly, was that Henry speaks a lot.


(As a playwright, this is a definite danger.  When you have an actor you like, and whose strengths you know, you tend to write him a LOT MORE LINES.  Because you know he'll interpret them better than you can write them.  So you just keep writing.  And let any actor who comes after be damned.)

While my scene-partner Henry was exciting to play against, his performance could be boiled down to Rage.  Rage which, while appropriate for a warlike king, is nevertheless uninteresting by the time you get half-way through the first speech.  (In his defense, this was Instant Shakespeare, which means no rehearsal, the audience is there, and you just make choices QUICKLY.)

Compare this to the recent production I saw of Henry Vat the American Shakespeare Center in 2016.  Here, although the ensemble was - as always - top notch, with especial credit going to their resident clown who absolutely slayed as Fluellen (my friend and I still crack up if someone says: "Look you"), regardless their Harry wasn't quite up to the task.  He played "noble young king" well enough, but got none of the nuance, none of the desperation, none of the Hal.  (In his defense, I later learned, this was not only his first Shakespeare, but his first title role, having been promoted suddenly during rehearsal when the original actor had to bow out.)

You can imagine my joy, then, to see a fully realized Henry V in Megan Greener's performance (see review).  Although I may have wished for a little more ease in her regal moments, that small complaint was nothing compared to the cheeky wit and roguishness, the civility she showed to her enemies, and the naked pain and yearning displayed for her "Hal" days in the often neglected Henry V speech, "Upon the King."

A Heart in the Right Place

In speaking with the Executive Director of Hamlet Isn't Dead, who did the cut for both their Henry IV (Parts 1 & 2), and for Henry V, I complimented him for the latter while asking him why he had cut the pivotol "I know you all" speech for Hal in 1 Henry IV.  His answer echoed Sam West's complaint: "I hate that speech.  So I cut it."

The beauty of Shakespeare's best roles is their complexity.  The joy of the history plays is that they are all of a piece, and we can track the trajectory of a boy playing at prince to a man becoming king.  But to lose any part of the paradox of a person is to lose the performance.  Thus, Chesterton's cry from Orthodoxy might be applied here, too:


The real trouble with this world of ours is not that it is an  unreasonable world, nor even that it is a reasonable one. The commonest kind of trouble is that it is nearly reasonable, but not  quite. Life is not an illogicality; yet it is a trap for logicians. It looks just a little more mathematical and regular  than it is; its exactitude is obvious, but its inexactitude is hidden; its wildness lies in wait. I give one coarse instance of what I mean. Suppose some mathematical creature from the moon were to reckon up the  human body; he would at once see that the essential thing about it was that it was duplicate. A man is two men, he on the right  exactly resembling him on the left. Having noted that there was an arm on the right and one on the left, a leg on the right  and one on the left, he might go further and still find on each side the same number of fingers, the same number of toes, twin eyes, twin ears, twin nostrils, and even twin lobes of the brain. At last he would take it as a law; and then, where he  found a heart on one side, would deduce that there was another heart on the other. And just then, where he most felt he was  right, he would be wrong.