Love is Blind. And Stupid. When You're Playing Shakespeare. 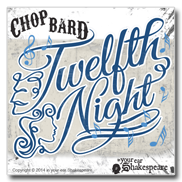 Last summer, I had the great fun of recording the role of Olivia in Shakespeare's Twelfth Night for the wonderful podcast, ChopBard, run by host and scholar, Ehren Ziegler.

This week, ChopBard released his commentary on Act IV...which includes Olivia's meet-cute (and abrupt elopement) with the halpless twin Sebastian, whom she mistakes for his sister, Viola, who's been in man's disguise.  (Only in Shakespeare, ammiright?)

With that, I'd like to offer a few thoughts on playing Olivia's ardent love for a female twin-in-disguise to her twin brother-in-surprise...when you're playing opposite no one there at all.


From the First to Eleventh Night
My first significant introduction to Twelfth Night was my Sophomore year of college at Franciscan University of Steubenville, OH, where I was cast as Feste, the (Male) Jester.  My self-depreciation says that I was cast merely because I could sing...but from the reviews I received verbally, I think I must have acquitted myself fairly well.

Certainly, I was thrilled to play anyone in Shakespeare.  I'd been an acolyte of the Bard since third grade, when I'd stumbled across the (Nearly) Compleate Works of Shakespeare at the school library...and the librarian hadn't stopped me from checking it out.  Now, finally cast in a Real!Live!Shakespeare!Show! (even if I was, sigh, playing a man), I threw myself into the role.  And in so doing, fell in love with the play.

A few years later, I found myself directing at the local high school, developing a program of drama where there had been none before.  I sat down with the students and asked them what sort of work they were interested in and, bless them, they immediately perked up and said: "Well, we're reading this really cool play, Twelfth Night..."

I couldn't have been happier.  We dug right in, and my career as "Classical Director Woman" began.

The Clothes Proclaim the (Wo)Man?

Fast forward to 2013.  Mark Rylance was playing his Tony-winning Olivia in the all-male Twelfth Night on Broadway.  Hearing great things about the production, I purchased a ticket one day at lunch and went with great joy to the theatre that night.

Rylance's Olivia was a revelation.  She was delicate, nuanced, unsure of her own authority - entirely "feminine" in a way many female Olivia's aren't.

What was even more, since both twins - Viola and Sebastian - were played by young men (rather than different genders), and since the production used heavy make-up, tailored period clothing and elaborate wigs, it became entirely believable that everyone would mistake the twins for one another!

(No need to bind breasts for them.  Which, by the way, is super uncomfortable.)

In fact, in the first scene when Viola exits and Sebastian enters, I checked my program notes, sure that it was the same actor playing both roles.  (I was wrong.)

Playing with the Bard

I bring this up because while performing in the show, and later directing it, there arises the almost unavoidable difficulty that all the actors in the show know the difference between the gal playing Viola and the fella playing Sebastian.  While the audience may be more or less fooled, the actors (especially Olivia, who transfers her affections for Viola-as-Caesario to Sebastian-as-Caesario) know their scene partners as "Jill" or "Joe" and what they like to snack on and what jokes they like to make and what they look like in rehearsal clothes.

Olivia, in rehearsing the play, rehearses the scene where she falls in love with "Caesario" opposite whomever is playing Viola.  Not against Sebastian.  If she, like myself, is a straight woman - she must cultivate a double-vision to believe that the woman standing in front of her is, by Olivia, seen as positively attractive and convincing as a man.*

Intrigued by Rylance's gender-bending production, I began to wonder what it would be like to rehearse, or at least have the experience of playing with genders in the first meeting of Olivia and Viola-as-Caesario.  I brought the idea to a theatre group I frequented, and spent a good hour playing with:


And several other permutations.

I found that Olivia simply wanted to be female - although Viola worked quite well with a male actor playing those lines as masculine.

(Try reading Viola's half of the scene with a certain forward energy and reciprocated confidence considered "typically male" rather than the usual interpretation of Viola being not-so-awesome at her disguise and allowing "typically feminine" nervousness and apology to enter the dialogue.)

Inspired by Rylance embracing a less-confident Olivia - and using my own experiences of always feeling "not particularly pretty" (always excepting careful pictures like this -->), I tried playing with Olivia's unveiling of her face to Caesario as less self-assured and more an actual revelation.  (Just because one is powerful, doesn't mean one feels pretty.)

While the director playing with us guided me towards what I'll call a more "traditional" Olivia - one who is confident, haughty, aware of her own beauty, disdainful and condescending - I found that this reading was "helpful" when playing female Olivia against female Viola-playing-male.  But, when simply playing a woman (Olivia) against an actual young man (Caesario), all the "girlishness" - all the insecurity and amazement and excited joy in the unknown, in the other came to the fore.  So, while Olivia never quite loses her cool when rehearsing with Caesario-played-by-man, the scene felt far more sincere and breathtaking.

The Fourth and Fifth and Sixth and Seventh Wall

Imagine my joy, then, when auditions for the role of Olivia in ChopBard's Twelfth Night were posted.  A friend helped me record my audition - and a few months later I was informed that I'd actually gotten the role.  All my sides needed to be recorded before July.  I set down to work.

When playing with Olivia the year before, I had no idea that my silly game of swapping genders would prove so helpful.  My preference for recording was to do so chronologically - to fully experience Olivia's story from start to finish.  And in her first scene (wherein she meets Viola-as-Caesario), all the work that we'd done beforehand assisted me in envisioning a scene partner who was neither Viola nor Sebastian - but just the charming "Caesario."

Since I was recording alone, I didn't even hear my scene partner's voice and was left to fill in the physical and vocal blanks myself.  Since Olivia is in love - as far as she can tell - with only one person, so was I in the recording.  Since Caesario keeps denying Olivia again and again and again, my frustration and desire as Olivia increased with each meeting.  I had nothing to snap me out of my utter conviction, as I recorded, that this was the same person I was pursuing - and that he was simply and utterly stupid-attractive.  Enough to make Olivia lose any power and control she may have previously possessed.

This was especially exciting when I finally encountered Sebastian-as-Cesario.  Because I wasn't suddenly switching scene partners - each of whom comes with a different energy, a different set of acting techniques and tactics, let alone a different personality and appearance! - I was free to enter the scene absolutely convicted that the Caesario I was rescuing against his will was the same Caesario who kept taking offense at anything I tried to do for him!

Half-exhausted from a good week of recording scene after scene of pursuit, and expecting to be rebuffed again (since for me there was no change), this piece of dialogue hit me happily hard:

OLIVIA. Nay, come, I prithee.  (Expecting him to say no...again.)  Would thou'ldst be ruled by me!


I found myself seriously taken aback.

Since I hadn't been waiting "backstage" while other scenes occurred; since I wasn't waiting around for a cue; since I had the same "idea" of Caesario in my head from beginning to end - I was free to be utterly surprised when the fellow I'd been pursuing simply acquiesced.

I was almost flummoxed when I delivered the remainder of the line:

Of course, Olivia being Olivia, she's going to make sure that Caesario's sudden reversal doesn't backslide, and so she drags the priest along and is struck to the heart when the seemingly similar object of her affection agrees to marry her.  Similarly, the end of Twelfth Night the comedy is nearly a tragedy for Olivia when Viola-as-Caesario declares that s/he's heading off with Orsino (of all people) so that:


Becomes incredibly heartfelt.  (And there's still room for fun lasciviousness in seeing "both Caesario's" with Olivia's, "Most wonderful.")

At present, I don't have any immediate plans to play Olivia again (although I'm eager to do so - hint hint, universe!), but I'd be fascinated to see how many of the discoveries of playing and rehearsing Olivia in such a manner could transfer into a typical production.

Regardless, I highly recommend to any of my fellow once-and-future Olivias to do yourself a favor and play around with your love being literally blind.
Labels: acting theatre twelfth night william shakespeare
Reactions:
Emily C. A. Snyder
Artistic Director and Co-Founder of TURN TO FLESH PRODUCTIONS. | Author of "Nachtstürm Castle," "Niamh and the Hermit." | Playwright: "Cupid and Psyche," "Math for Actors." | Classical director and educator.