What is Emily writing now?   Here's a schedule of upcoming publications as well as a sneak peek of Chapter 3 of Presumption, a Maria Lucas/Col. Fitzwilliam spin-off from Pride and Prejudice!

Available in December: Nachtsturm Castle as an audiobook, read by Suzanne T. Fortin.  (Have a listen here.)

Available for Valentine's 2018: Letters of Love & Deception in e-book form for Kindle.

Available for Summer 2018: Letters of Love & Deception from Audible


And now without further ado, the third chapter of Presumption:

Wherein Maria is Acquainted with her Fate, and Proves a Most Stubbornly Practical Heroine

Maria had not yet put the marmalade on her toast when Lady Lucas descended upon her.  The terms were clear: if Mary Bennet could be married by Christmas, it was not inconceivable that Maria Lucas could be engaged by Christmas Eve.
Everything about the prospective beau was known, down to the last farthing, saving only his name.  He should be a gentleman; of this there was no doubt.  Of some substance: at least five to ten thousand pounds a year, to match with the eldest Bennet sisters.  Certainly no less than a thousand pounds at any rate, so long as he did business in London, but could not be said to own one.  (Which struck out the Welsh butcher’s boy in Meryton, much to Maria’s dismay.)  To continue: he may be of any profession he chose, so long as he could never be mistaken for anything but a man of leisure – and all of his “h’s” were properly in place, which is to say inopportunely and increasing in times of indignation.  He should be English, or if not English, then titled, and if not titled, then capable of taking a seat in Parliament, and if not capable of Parliament, then turned out of doors immediately.  He must not be in the military.  Unless he had purchased his commission, and at a cost.  All Captains were right out.  He must have at least one estate, although two would be better, and only one of those newly acquired.  His disposition and fidelity were naught, so long as he required little to nothing in the way of a dowry – Sir William’s finances not being everything one might have hoped for, and Maria’s two eldest brothers being in a fair way to spend the remainder biscuit.  As for his age, height, looks and other such trifles, in which Maria took as serious interest, Lady Lucas assured her daughter that they were of no real consequence.
“For looks, you know, fade in time.  And it is for this reason that many fashionable women have a separate bedroom.”
Had Lady Lucas merely tyrannized a nation, our heroine may have had some hope of clemency; but the domestic tyrant is never swayed.
Fortunately, far from greeting this news as soggily as Maria’s over-marmaladed toast, our heroine concluded the interview with an air of eagerness.  For no mention had been made of following in Charlotte’s footsteps and marrying a churchman.  And besides, Maria was just eighteen, still far from spinsterhood, and – so she thought as she examined her figure in the mirror – far prettier than Charlotte and therefore a more valuable commodity.  Moreover, the prospect of visiting Bath in the Little Season was truly exciting.  Especially since so many interesting people had retrenched there lately.  A word which, in these times of war, Maria completely misunderstood.
But the difficulty remained: whom should Maria marry?  She was not so romantic as to be ignorant of her financial considerations.  Charlotte had chosen wisely, if rashly, and would have a comfortable future as a parson’s wife and eventual mistress of Longbourn, too.  Maria’s two eldest brothers might marry as they chuse: the first being heir to Sir William’s estate, the second being in possession of that natural charm which recommends itself to women of good fortune and poor taste.  Maria had neither money nor graces, yet she possessed her father’s name – and that might be something.
Moreover, and here she almost chid herself for the thought as soon as thinking it, were there any solace in choice, or if the course of true love could run smooth, our heroine hoped – secretly hoped – that in addition to her mother’s list of attributes, the gentleman whom Maria married might also be kind.  Might also, and Maria blushed at her own girlishness, might possibly be someone she could like as well in the daylight as a dark room?  Might also, and the thought was nearly inconceivable, yet our heroine journeyed on – might…like her, too?
But as for who?
For Maria had no thought – as doubtless, dear reader, you have – of applying to Colonel Fitzwilliam immediately as perfect in every possible respect.  Were we at Lucas Lodge now, the letter to the Colonel should be writ and sent, his good will acquired, and our dilemma solved.  But we are not heroines, and any book of ours would be extremely slim.
Still, you may ask, did the Colonel not even pass her mind?  To which I must report that, naturally, he did.  As did Captain Denny, and Mr Robert Ferrars, and even the Welsh butcher’s boy who tugged his forelock and blushed every time she passed by. 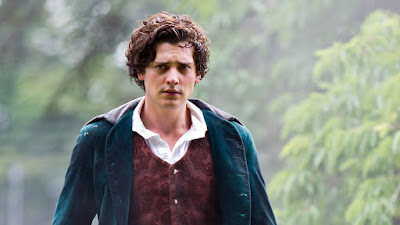 More practically as the weeks went by, Maria thought of applying to Kitty for advice, since her friend was always drawing the attention of every eligible bachelor who wandered through Meryton.  All the moreso now since Kitty Bennet had grown into such a great beauty in her own right, which beauty was only enhanced by three of her sisters marrying well.  Which meant that many a poor man courted Kitty in the hopes of touching her brothers-in-law’s fortune.  Mr Bennet, recognizing that his only remaining daughter was in danger of falling prey to a wicked man as his youngest had done, therefore had the foresight of sending Kitty to tend on Lizzy at Pemberley, where, he reasoned, Kitty would meet no eligible men of ill-fortune, and learn a great deal about trout fishing.  In which presumption, he was proved right.
Yes, you may urge now, but what of the Colonel?  To which I can only reply: what of him?  For us, two chapters have passed; for Maria, two years.  At sixteen she had thought much of him, of his gallantry, of their conversation full of everything and nothing.  Somewhere she still possessed those pressed roses from that happy afternoon when she had been seen as a lady and not a little girl.  She was grateful to the Colonel, but far too practical to think that he should think anything of her.  Indeed, if she considered anyone, it was the butcher’s boy whom she had known since childhood and who, except that he was precisely the opposite of her mother’s prescriptions, had the great advantage of being present.
There is much to be said on the nature of love, and many poems have been written about it, but they almost all neglect the virtue of proximity.
Thus, when Maria next went into the heart of Meryton, wearing her gayest bonnet, festooned with yellow ribbons and silk rosettes, she passed by the butcher’s storefront several times, laughing merrily at no one, and looking quite the fool.  At last she went into the shop, only to discover from Mr Burke, the proprietor, that his apprentice had married a cartwright’s daughter the week prior and set up shop in Welham Green.
Worse, when Maria commented that he could not have known the cartwright’s daughter for very long, Mr Burke assured her heartily that they had met several years ago and enjoyed an understanding for the past two.  Maria, to save face, bought an extra chop and returned home.
She delivered the chops and retired to her bedroom, pacing the length and width and hypotenuse, feeling the full weight of all her very few years.  There was no hope for it.  She would be an old maid, like her sister.  Or married hopelessly, like her sister.  No, not married.  She had even missed the butcher’s boy, whose name—she realised with an embarrassed start—she had never positively known.  Not that she had wanted to marry the butcher’s boy, whomever he was, since he was so far beneath her station, but that he ought to have had the common decency to wait in agonies for her.
Perhaps, Maria thought, the cartwright’s daughter had a brother.
Fortunately, Providence is a better matchmaker than we, and had no butcher or baker or candlestick maker in store for our Maria.  What plans He made were all for Bath, where our heroine was bound.  Bound, that is, after a suitable eternity at the parsonage at Hunsford, very near the proximity of the flower gardens of Rosings Park…and the fickle turn of Fortune’s wheel.
Labels: amazon.com audiobooks austenesque book release colonel fitzwilliam e-books free fridays jane austen kindle maria lucas new releases presumption pride and prejudice romance writing
Reactions:
Emily C. A. Snyder
Artistic Director and Co-Founder of TURN TO FLESH PRODUCTIONS. | Author of "Nachtstürm Castle," "Niamh and the Hermit." | Playwright: "Cupid and Psyche," "Math for Actors." | Classical director and educator.