Crying "Fire" in a Crowded Theatre (Things I Have Done)

I have, in my life, cleared out two buildings that were (kind of) on fire.  The first one was at a production of Hello, Dolly!, the second was a local Wal-Mart.  I nearly cleared out the local mall, once, when the fire alarm was going off, except that security actually seemed to have it under control.

This is the story of how I cleared out a theatre when the fire alarm went off. 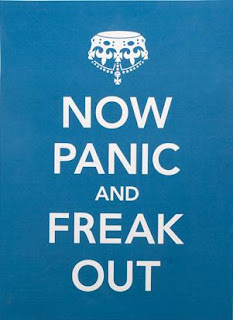 In the Spring of 2007, I was prepping for the summer Shakespeare production of Much Ado About Nothing.  As a consequence, my face had become somewhat recognizable in local high schools where I had been recruiting for our second year of theatre for adolescents and young adults.

What this meant was that I was going to see an inordinate number of productions - good, bad, and indifferent - after which I was expected to give some sort of review - always good.  So when the opportunity presented itself to see Hello, Dolly! at a local high school where I was not known (or, at least, only known to the director, whom I could avoid), I took it.

The production was typical high school production level.  The singing was good, the costumes were rented, the energy was so-so.  It wasn't the greatest theatre I'd ever seen, but neither was it the worst.  However, what was great was the ability to think whatever thoughts I wanted and know I'd never need to verbalize them to the cast and crew.

You can see where this is going.

Now, because I'd bought my tickets at the door, I actually ended up sitting in the very front row, in the very central seat.  This is a tricky place to sit because the actors can and do see you.  My sister and I sat front row center when we saw The Importance of Being Earnest in Dublin, Ireland, and I swear our intent gazes threw off Lady Bracknell by a lot.  Being cognizant of my precarious position, then, and wishing to retain my anonymity, I made sure to school my face at Hello, Dolly!  If I was unimpressed with a song, I merely thought it...but I didn't show it.  If I liked a scene, I smiled politely, but I didn't applaud enthusiastically.

I wanted to remain unseen.

Then, suddenly, in the middle of the Harmonia Gardens scene - moments before they were about to break into the title song...

The fire alarm went off.

I should probably mention, now, that this show was taking place in central-eastern Massachusetts.  We're very...polite...people here.  Kind of uptight British-y, in that we "don't want to cause you any trouble."  And so, like good little Massachusetts citizens that we are...

We all sat there.  While the fire alarm went off.  And the actors continued acting.  We.  All.  Sat.  There.

This continued on for a good few minutes.  There was a little polite squirming, as if to say: "Oh dear.  Isn't anyone going to deal with this?"  Hesitant looks at the doors to see if someone was coming to tell us to go, or gauging whether we'd be noticed if just one or two of us slipped off - not to disturb the show or anything, God forbid - but just in case...you know...just in case there's a, well, a fire?

Still, we sat there.

"Someone must know more than we," we all thought.  "The actors don't seem bothered.  They're continuing on.  Perhaps there's just a glitch in the system.  Perhaps it's been going off all week and we should just ignore it."  And so on and so on.

And still, we sat there.

As I said two, three minutes passed in this fashion; an eternity.  When a little old man came out from the stage right curtain, down the front stairs, and started walking hesitantly across to the orchestra in the corner.  As he passed by me, I grabbed onto his sleeve and whispered:

He nodded, and put his finger on his lips, and continued toddling across to the orchestra, seemingly with the intent of perhaps quietly and with a minimum of fuss letting every individual know that, if they didn't mind, they might want to consider leaving the theatre, since it was, in fact, on fire.

I stood up just as Dolly appeared to sing her big number.  I stood up in front of the actors and the audience, turned around with my arms outspread, and called out in my biggest theatrical and teachery voice:

Everyone grabbed their stuff and left.  The actors streamed off the stage, leaving their props behind them.  Mothers and fathers and siblings dragged along to the show all grabbed their coats and streamed out of the theatre.  The little old man looked at me with something like affront, but I didn't care, I was making sure all the actors were off the stage and we were all getting out of the building.

So much for anonymity.

However, when I got to the doors of the building, everyone had clumped into a bottleneck.  Now that the first people to leave were safe, they didn't feel like moving out into the cold winter air.  (To their credit, there were snowbanks a good twelve feet high from all the accumulation that year.)  However, there were still people backed up down the hall and into the theatre.

"Don't do it, Emily," I tried to tell myself, even as the fire alarm continued to go off and we all stayed inside.  "You're not the principal here; you're not even a teacher here.  You don't have a kid here.  You don't even love this production all that much.  Surely, surely, there are local firefighters in the audience, or people who work in the superintendent's office, PTA presidents, bossy mothers...somebody who will deal with this."

No one spoke up.

And the fire alarm continued to go off.

We finally started getting out of the building and to the parking lot.

I tried.  I really, really tried.  There must have been the family of local police officials, dispatchers...good God!  Wasn't there one single teacher at that performance?  Certainly there was the directors, the stage manager...the students should at least know what to do at a fire drill, right?  Right?  But, nope.  Everyone was out of the door, and huddled up against the building.

And the fire alarm continued to go off.

I took a deep breath.  I didn't know where they were supposed to go in times of a drill.  But against the burning building probably wasn't the best idea.  I raised my voice again:

I must have been bossing around the vice principal, or important bankers, or lawyers, financiers, politicians...I don't know.  I was mostly moving middle aged folk who moved reluctantly.  And while I was haranguing them, and the fire alarm continued to sound...

I suddenly turned around and was face to face with the director.  Who I really didn't like.  And who didn't really like me.  And whose show wasn't horrible, but wasn't great, and who I was so glad I didn't have to see.  Until now.

I smiled.  (I can act fairly well, too.)  "Hey!"  I said, feeling kind of bad for his show being disrupted...and also ticked that he didn't freaking move us out of the theatre if he'd been there.  "How's it going?  This is so sad.  I'm so sorry this happened.  You!  Yes you!  I can see you!  Get the freak away from the building, mister!  (To some venerable gentleman who'd tried to creep back to the school wall.  Now back to the director:) Anyway, this is so awful.  But the show was going really well.  Sorry about this.  I mean it, buster!  I can hear the firetrucks on their way now!  Back AWAY from the building!  Anyway, catch you later.  TO THE SNOWBANKS!"

Eventually, the firemen did come, and found that the custodians had set off the fire when drying a ton of towels from some sporting event and causing a small fire in the laundry room.  Everything got settled pretty soon after that.  We were let back into the building.  The actors began at the top of the scene, and let me tell you - the show was worlds better after the event.  The audience was appreciative of their work; the actors were grateful to finish the show.  We all clapped along to "Hello, Dolly!" as the waiters did their high kicks, and Dolly sang her heart out.

The reason why I'm writing this story now is that I find that I'm crying fire in a crowded theatre again.  Those who are friends with me on Facebook have been subjected to a series of links that don't normally adorn my page.  Most often, one can find random geekery about Lord of the Rings or Star Wars or Downton Abbey, or even more likely, updates and photos about my latest plays, or information about my novels.  Perfectly lovely, perfectly harmless stuff.  The sort of stuff that one might enjoy anonymously and without complaint - not so great, not too hideous - rather like that production of Hello, Dolly!

But lately, I have taken the very great risk of alienating my colleagues and friends by posting news about the recent actions taken by our government.  Now, you should know that by and large I'm with Mercutio on the issue of politics: "A plague on both your houses!"  I vote in all matters presented to me, I think about writing letters to my politicians, I will refer obliquely to something...but more often, I'll watch something pop up on my feed - opinions which are both agreeable or noxious to me - and I am silent.

The fire alarm has been going off for a while, and I've been sitting still.

There's a problem in this world, and that problem is me.

I can write all the lovely little stories in the world, all the fluffy comedies, all the sweet romances that I like - and all around us, O my friends, our nation is burning.

Well, it's time to go.  Time to stand up and speak.  Time to move not just a few people to safety, but all of us away from the danger, no matter the cost to our anonymity.

We have been sitting in a crowded theatre, watching actors, while the fire alarms go off.

AND WE ARE STILL SITTING.

Well, I would very humbly suggest that it's Time To Go.


I am a Catholic.
And I am shouting "fire" in a crowded theatre. 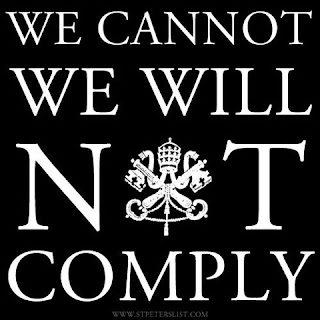