As is no surprise, juggling two plays and about to begin a third leaves very little time for this lady!  However, it does allow me to play with the images for my two main plays, which are about as far apart from one another as possible. 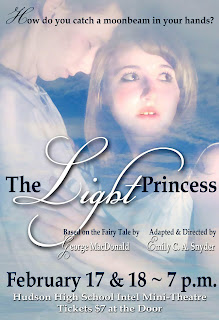 Light Princess is a fairy tale in every evocative sense of the word.  It involves kings and queens, jester and witches, princes and princesses, a curse, true love, sword fights, heroism, flying, and something lovely.  However, it isn't without it's depth: as the story keeps emphasizing, for true joy one also needs the possibility of sorrow.

So, in the midst of puns and nonsense, we also have a tale of revenge and self-sacrifice.  And the knowledge that if laughter requires sorrow, then gravity requires light. 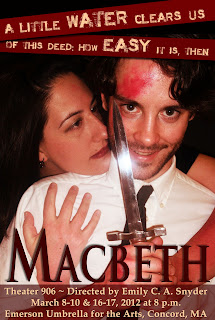 Conversely, Macbeth is the cautionary tale of the same.  Although there is quite a lot that's funny about Macbeth (such as the title character agreeing after the murder that "Twas a rough night"), it's essentially a tale of how revenge can begat revenge.  It's about how private offenses ripple through society, until no creature's innocence is spared.

However, with that, we are also exploring how Macbeth was, originally, a good man.  "What thou wouldst highly, thou wouldst holily," as Lady Macbeth says.  Too often, casts and directors rather eagerly get to the murders and allow no human emotions in the aftermath; once Macbeth has killed once, he's eager to kill again.  But every human, even the worst of us, is always in danger of salvation and capable of remorse, even at the end of things.

If there is any overlap between directing the two shows simultaneously, it probably lies in this overlap of good and evil, revenge and remorse, life and death - that place between in which we live on this earth.  T. S. Eliot put it best, I feel, in his poem "The Hollow Men: Part V:" (1925)

Now, I personally don't agree with the ending line - and I write plays to that effect.  Life ought to end with a triumphant trumpet blast, or with the sigh of the wind - not with a whimper.  (Although in the case of the Macbeths, Eliot may have it right....)  But the point that we live our lives inbetween - that we laugh when it's inappropriate and cry when we're happy - that sometimes the metaphorical truth is more honest than the facts - that there are "more things between Heaven and Earth than are dreamt of in our philosophy" - these things are important to me.

Important, too, is to give the world a little glimpse of beauty and laughter and the opportunity to throw toilet paper through an audience.  That's Light Princess.  But equally important is to show the erosion of innocence, the way our actions have effects, the terrible things we can do...and that we can allow to happen to others by doing nothing.  That's Macbeth.

In terms of keeping the two of them straight in rehearsal, there really is no difficulty.  The casts are sufficiently different from one another, the production needs and tonal elements keep the plays pleasantly separate from each other.  Double rehearsal days, double production notes and production considerations do double the workload - that's a little rough at times, because I feel like I'm constantly playing catch-up on paperwork, favor-asking, information-giving - and somewhere in there relaxing with meaningless TV.  And Downton Abbey.


"My candle burns at both ends;
It will not last the night;
But ah, my foes, and oh, my friends—
It gives a lovely light!"
~ Edna St. Vincent Millay, "First Fig"
from A Few Figs and Thistles (1920)